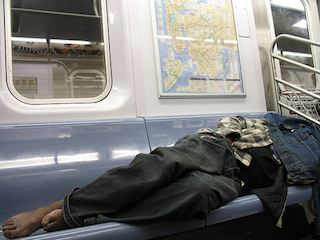 The Mayor [Bill de Blasio] was asked about the homeless sleeping on the subways and one of his first words in response was “MTA.” New Yorkers get the Mayor is making every attempt to distance himself from the Transit Authority, but they aren’t fools. The fact is that since 1995 the NYPD has been the police force charged with enforcement in the subway system.

The MTA board gave Mayor Giuliani the authority to consolidate the Transit Police within the NYPD, giving the City primary jurisdiction. That’s a fact. Recently, the MTA has repeatedly asked the NYPD to help the expanding number of homeless people in the system find shelter outside of the trains and stations.

The NYPD needs to enhance its homeless outreach efforts in the subways. We all know that homeless people need help; clean shelters, job training, mental health services, and leaving them on the trains is degrading for all. The response is not to defend or excuse the presence of the homeless, but to get them the help they desperately need.

Every New York City Mayor since Koch has realized this except our current Mayor. We again are asking the NYPD to step up their presence and increase enforcement and the city must stop running from its responsibility. We hear from subway riders all day long and their opinion is unanimous: Mayor, fund the subway repair plan and get the sleeping homeless off the ‎trains. It’s the Mayor’s job.

Strong Reception – A Q&A with The Peak’s Jimmy Fink