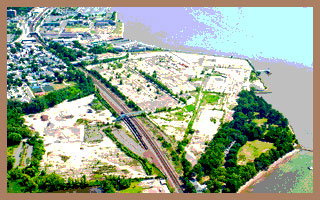 It might not register with new arrivals to Sleepy Hollow, however, for many residents who were born and raised in, or moved to the Village years ago the vacant GM property was dismissed with, “They’ll never develop that place.”

The painstaking years of planning under the former Mayor of Sleepy Hollow, Philip Zegarelli, and the numerous committees of dedicated, knowledgeable and informed residents came ever so close to adopting a development plan that gave back to the Village as much as it offered the developers.
If time is the devil of development then Lighthouse Landing was visited by the horned spirit himself who left it in shambles. The real estate market tanked, the local government changed hands and those who said, “I told you so,” were happy to be right again. Like the Tappan Zee Bridge something was bound to give and after George Pataki left the Governor’s Office, another Cuomo, Andrew to be exact, set the throttle on The New NY Bridge to full speed ahead. Current Sleepy Hollow Mayor Ken Wray has done the same with the newly renamed Edge-On-Hudson waterfront development.

With a number of like-minded individuals in Village government, on Boards appointed by the Mayor, and committees headed by former elected officials, Edge-on-Hudson received its first subdivision approval on Thursday, October 22 by the Planning Board, chaired by recently appointed Lisa Santo.

Phase I of the development as it is referred to consists of a 24-acre portion of the 65-acre West Parcel. This section is west of the railroad tracks and the farthest removed from the waterfront. 306 residential units have been approved.  In 2011 the Village had approved 334 units for Phase I and it is unclear why less units are being built. It would appear that the original number of 334 units would generate more tax revenue for the Village.

The breakdown for Phase I is:

There is a saying often proffered regarding planning. “Good planning is good planning. Bad planning is forever.” In a time when municipalities are ever vigilant of the need for committees and boards of citizenry actively volunteering their time and expertise to sound planning, the resolution put forth by Sleepy Hollow’s Planning Board on October 22 raises a question. Why is the Village Board of Trustees considering adopting a local law “that would transfer jurisdiction to the Planning Board to perform required architectural review…”? Where would this action leave the current Architectural Review Board?  A simple answer is that it would cease to exist with regard to any action on Phase I of the development. Where will Sleepy Hollow be without an Architectural Review Board, and what has prompted this, and who is promoting this action?

Finally with regard to the Planning Board resolution it should be noted that on June 7, 2011 a “Special Use Permit” required that the Phase I include “separate parcels for the Waterfront Open Space, the portion of the South Parcel intended to be for public uses by the Village, and that portion of the West Parcel associated with the first phase of development.” Neither parcel is included in the Subdivision Document, begging the question, why not? Also, what are the reasons for reversing the order of construction phasing. Original planning had construction continuing along Beekman Avenue and down to the waterfront. From there construction would continue inland towards the railroad tracks. The reasons were sound – to mitigate noise and dust in adjacent neighborhoods off of Beekman Avenue, and to create a more scenic appearance for already existing residential waterfront housing. The planning was sound and the adopted construction phasing plan was to protect existing neighborhoods (as much as possible) from construction impacts.
The new phasing of construction has reversed the process with development now beginning in the easternmost portion, and closest to the railroad tracks.

Is the hard work of residents and countless years of planning spent in coordination with Village officials either being forgotten or is expediency the rule of the day in Sleepy Hollow? There are answers if residents care to ask the questions.

Planning Board meetings for the Village of Sleepy Hollow are televised and copies of their resolutions are available at Village Hall at 28 Beekman Avenue.