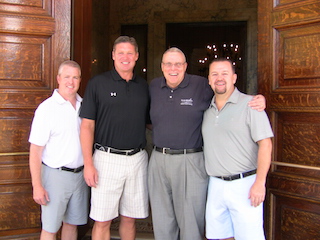 Golf enthusiasts spent a great day on the renowned greens at the historic Sleepy Hollow Country Club, Briarcliff Manor on Tuesday, August 30 in support of Make-A-Wish® Hudson Valley. It was entitled, Golf for Wishes, the third of four special signature events that Make-A-Wish® Hudson Valley has presented as part of its 30th Anniversary celebration to help grant the pending wishes of more than 150 kids throughout the Hudson Valley who have life-threatening medical conditions.

In addition to teeing-off and playing on the challenging 103-year-old course, supporters enjoyed cocktails and dinner following an afternoon of play on the unique 27-hole course.

Thomas J. Conklin, Make-A-Wish Hudson Valley President and CEO, said: “We are excited by the very strong interest that Golf for Wishes has generated, building on the success and momentum generated by our first two 30th Anniversary signature events –  the Frank and Friends concert at Tarrytown Music Hall that was headlined by legendary Broadway composer and songwriter Frank Wildhorn, and our sold-out Annual Wish Ball at Abigail Kirsch at Tappan Hill.”

Golf for Wishes got underway at 11am with registration and brunch, followed by the shotgun blast at 12:30pm that officially started an afternoon of play for hundreds of supporters. At 5:30pm, players rejoined for cocktails and dinner as well as for an awards ceremony. In addition to the contributions that each golfer made, Bill Georges, the COO of Active International, contributed $10,000, and Joe Pepe of Pepe Auto Group, along with Larry Weiss of Tomorrow’s Atlantic contributed $7500 each as dinner sponsors.

Conklin praised the generosity of the thousands of supporters – individuals, organizations and companies – that made it possible for the chapter to grant the wishes of more than 2,400 children during the past 30 years. “I am confident that this spirit of collectively scoring a hole-in-one on behalf of our non-profit organization at Golf for Wishes will make it possible for us to grant the one true heartfelt wish of every eligible child in the Hudson Valley.”

The fourth and last 30th Anniversary signature event will be the 11th Annual Walk/Run for Wishes which will be held on Sunday, October 30 when hundreds of supporters, including Wish kids and their families, converge at FDR State Park in Yorktown Heights.

For more information about  the 11th Annual Walk/Run for Wishes and opportunities for individuals, companies and organizations to support these events, including becoming a sponsor, making a donation and forming a team, visit www.hudson.wish.org/30.