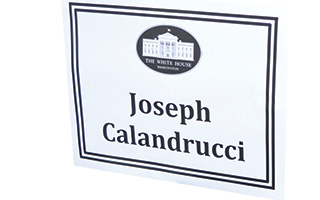 There were two firsts on Wednesday, May 14, and both of them took place in Tarrytown. The first “first” was that the 44th President of the United States visited (you guessed it) for the first time. The second “first” (sounds a little like the Who’s on first? Abbott & Costello routine) was that River Journal had access to a 12-year old photographer named Joseph (Joey to his friends) Calandrucci who photographed the event. Master Calandrucci’s photos can be seen here.

An Excerpt from the President’s Speech May 14,  Tarrytown, NY:

“You know what other countries are doing?  European countries now invest twice as much as we do. China invests four times as much as we do in transportation.  One study recently found that over time, we’ve fallen to 19th place when it comes to the quality of our infrastructure — 19th place.

The entire speech can be read at:
http://www.whitehouse.gov/the-press-office/2014/05/14/remarks-president-building-21st-century-infrastructure