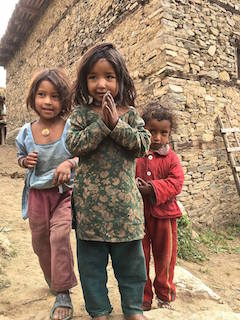 I still get emotional when I think of the dignified Humli woman who walked two days to reach our medical clinic, set up in the dirt-floored building high up in the far northwest corner of Nepal near the Tibetan border. She wasn’t alone. Altogether, over ten days we treated over 400 people in four villages, many waiting a year for medical attention. The woman’s heroic journey speaks to the dire need for medical services in this isolated corner of Nepal at altitudes ranging from 10,000 feet and up in the rugged Himalayan Mountains, the highest in the World.

Her journey also reflects the toughness of the people who live at the top of the world where, if you make it to puberty, you have a good chance of living a long life. We saw quite a few people my age (69) and older who, all things considered, were in relatively good health. Many had knee and lower back issues, likely related to carrying heavy loads of food and wood, and to stoop-labor in the fields.  I’m no doctor, but as a farmer, I can speak to the toll fieldwork takes on the body.

It wasn’t easy for her to get to our clinic and it wasn’t easy for us to get to where we could help her.  The short runway at the Simikot Airport (surrounded by steep mountain peaks and said to be one of the most dangerous airports in the world), the starting point of our mission, meant the only way in by air was in a small turboprop plane – so small it had to make two trips to get us all to Simikot. And the only way around once there was on foot.

This is the Humla District of Nepal, populated more than a thousand years ago by Tibetans seeking new lands and the safety afforded by the steep terrain.  Even today, Simikot, an outpost of civilization, is an island in a sea of towering peaks, 53 miles from the nearest road.  There are no cars, not even motorbikes.  The region is, in almost every sense of the phrase, a world apart.

Even so, Simikot is not entirely off-the-beaten-path.  The town is a jumping-off point for pilgrims making their way to Mt. Kailash in Tibet, considered the center of the world by Hindus and Buddhists.  You can take a helicopter or hire a Sherpa to trek 80 strenuous miles over six days to get there.

Our mission, sponsored by the non-profit Humla Fund and guided by Responsible Treks, was simply to relieve suffering.  Even though we received advice from the Lamas traveling with us, all of whom had grown up in the Humla district, on staying calm in the face of illness, there were moments when I had to stop to gather myself. The high hopes people had for relief from their ailments was palpable.  Many reported feeling better from their acupuncture treatments and the medicinal herbs. Others needed additional and ongoing attention, something we couldn’t provide in the short time we were there.

This was the third Humla Fund mission in as many years, and clearly, the word is getting around. Every village welcomed us with pomp including drumming, dancing, and singing, plumes of burning incense, and villagers dressed in their finest ceremonial garb. The welcoming rituals included prayer cloths draped around our necks, and generous dabs of yak butter placed on the head, a blessing of the highest order.

Our group of 16 medical practitioners (and volunteer assistants, like me) delivered Chinese medicine, mainly acupuncture 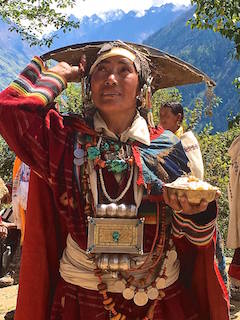 and medicinal herbs, treatments familiar to the Humla people.  And it works.  According to Heidi Harding, founder of the Humla Fund along with her husband Tim Aitken, the general health of the people they’ve seen over the three years they have sponsored the mission has improved significantly.  Their plans for a permanent clinic are accelerating.  In fact, they have secured land, and while we were there, they met with builders who can get the job done, hopefully in a few years, depending on the success of their fundraising efforts.

The richness and blessings we received were in stark contrast to the lack of all that we take for granted in the US.  Agriculture and the cycles of nature dominate.  The amount of food produced in the terraced fields around the mountain villages determines the number of people who live nearby.   Wood for cooking and warming comes from the high hills above and is hand-carried on steep and rocky trails.  Yaks provide everything from meat to milk, skins to make the soles of shoes and hair to weave blankets and clothes.

To reach the villages served, we trekked miles on steep and narrow paths the locals have used for centuries. We slept in tents and easily made friends – as happens when people get together with a shared purpose. Expert Sherpas, cooks, horse handlers (smallish and very tough horses carried our gear), and the guiding presence of three Tibetan Lamas softened whatever hardships we encountered.  All told, 36 people supported our 16-person mission.  The scenery was stunning and the sight of 52 people plus a dozen, or so, pack horses winding their way on the hillside paths was itself something to witness.

The lack of familiar conveniences and comforts in Humla is a bit jarring.  In addition to there being no motorized conveyances of any kind, there is no gas-powered equipment, chain saws, tractors, or anything you normally find on a farm or in a garden that makes life a little easier.  Not even a wheelbarrow or garden cart, and not many hand tools save the homemade sickles the women carry in the folds of their clothes for harvesting grains.

With all the interest in this country in sustainable living styles, the Humla are already there.  Or, as some observers have said, they are so far behind, they are ahead of the world, at least in that regard. 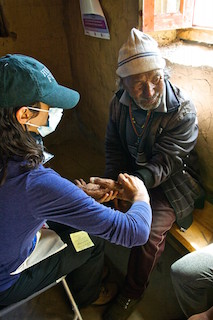 What exists is a rich culture based on the village tribe, clans, family, local politics (yes, they have that there, too), spirituality (mostly Hinduism and 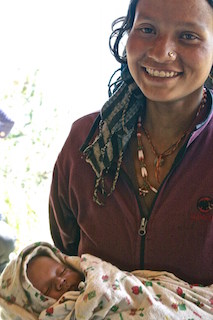 Buddhism), and local shamans. They have lived this way for at least a thousand years, and it is easy to imagine they could live self-sufficiently for another thousand.  In a way, it is no surprise that a Western mind could imagine finding a Shangri-La in the Himalayas as James Hilton did in his classic 1933 novel, Paradise Lost.  It’s a wonderful dream, but while life is rich in Humla in a nonmaterial way, the romantic notion of a mountain paradise is belied by the harshness of the Humli’s daily life.

Founders and supporters of the Humla Fund are eager to preserve the agricultural, humanistic, and social culture of the region as change is on the horizon.  The Chinese are said to be preparing to build a road over the mountains from Tibet in the next few years, a change sure to bring tourism, vehicles, fuel, and material goods of all kinds.  Hotels, stores, and conveniences will, no doubt, follow.  Money and banks, the Internet and cell phones will be part of it all, of course.  And Humli, especially the younger ones, will move from their villages to experience the relative ease of living in town.

Meanwhile, the opportunity exists to deliver much-needed health services and to participate in the Humla Fund’s annual mission and its efforts to build a permanent clinic along with a school and monastery.

If you are interested in making this service trip as a volunteer, or much-needed medical professional, contact the Humla Fund offices.  The cost of the trip is $4,000, a reasonable amount when you consider that it covers all your food and lodging and transportation costs within Nepal, not to mention the three-dozen members of the support team accompanying you. Your money goes to the local economy – farmers along the way provide much of the food, and the sponsoring guide agency hires local Sherpas and kitchen staff.

For me, the trip had both purpose and, as it turns out, meaning that is summed up by the woman who walked two days to get to one of our clinics.  That was an act of determination that touches me, and reward enough for being on the mission – not that any was needed.  But there was more.  At one clinic, a patient at the end of her session took both of my hands, bowed her head and said, “God bless you.”  I’ll be back.

About the Author: Richard Cross