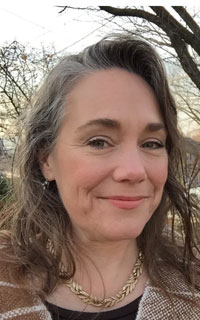 River Journal has not gone too far afield in writing about the Rivertown that lies north of Sleepy Hollow. In fact, the recently elected Mayor of Ossining, though born in Manhattan, was raised in Sleepy Hollow (North Tarrytown back in the day) on Kelbourne Avenue in Philipse Manor where her parents still live.

Victoria Paxton Hawes attended all the local schools and graduated from Sleepy Hollow High School in 1989. She went on to receive a Bachelor’s Degree in Sociology/Anthropology from Ohio Wesleyan University. During her college years she learned to speak Spanish while studying in Mexico City. After graduation she worked full-time at a group home for adolescent boys and also part-time in the juvenile court system in Ohio.

From Ohio it was back to her birthplace where she spent most of her twenties and early thirties living in both Manhattan and Queens. With the physical move came a change in vocation as well, and it was as a location manager and scout for filmmakers one of whom was her brother. Through filmmaking she met and married Eric Gearity, and it is Mayor Victoria Gearity we interviewed at an Ossining diner in late November.

The couple moved to Ossining in 2006 when she was expecting the birth of her first son, Paxton. Fifteen months after his birth, brother Levon was born and the two boys, by her own account, “spend as many waking hours as possible playing sports.” Not to downplay the academic side of life in a school system she champions, Mayor Gearity added, “they are both thriving students in the Ossining schools.”

Victoria Gearity, one must realize is anything but “laid back.” Quite the opposite. She operates in the “drive mode” almost all of the time and with her foot on the accelerator, the rest of it. Her first attempt at community activism regarding the Ossining School Budget moved her from a “frustrated suburban stay-at-home mother of babies” to a, “I’ve finally found my people” force. The next direction she headed toward was, by her account,  year for an interview to occur. Obviously the interview went well, for she became a member of the Village Environmental Advisory Council (EAC). “Our task was primarily to review the environmental impact of proposed development. It was interesting, and a little frustrating (there’s that word again). I realized I wanted to be involved a lot earlier in the decision making about what the future of Ossining would look like,” she said.

There’s a saying, “Be careful for what you wish, you usually get it.” In Victoria Gearity’s case a Village Trustee seat became available after one of its members resigned. She interviewed for the seat and was told to “get more involved” in the Community and the next time around she’d be in the running. That’s exactly what she did by becoming active in the Ossining Democratic Committee. In 2012 she won the Committee’s endorsement for Trustee when then current Trustee Marlene Cheatham decided not to run for re-election. She ran unopposed and yet campaigned by reaching out to community groups and listening to their concerns. She “hit the ground running” (what else) as a newly elected Trustee and halfway through her first term decided to run for Mayor of Ossining. “This was not a small decision. I was looking to unseat an incumbent in my own party, who hadn’t done anything
egregious,” she noted.

The Ossining Democratic Committee endorsed Gearity and in the primary that followed she won by a “decisive margin.” No Republican candidate challenged, however, the incumbent Democratic Mayor ran against Gearity on another line — the Working Families Party. She won the election and by her own account, “It has been quite an exciting year. I ran on change and there has been lots of it. New faces and a new approach to Village government. Today our government is more open than ever before,” she said.

At the end of the interview Mayor Gearity shook hands and talked with several groups of people at the diner before walking out in her cowboy boots, climbing into her pickup truck and driving off to a full day’s  worth of meetings. 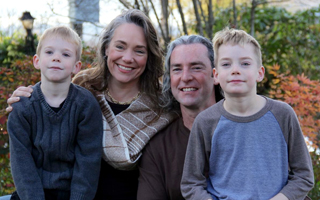 She’s not feeling “frustrated” anymore because she wants what she has — a family and,  outside of it, a sense of fulfillment with how she spends her days, long and sometimes taxing as they may be.