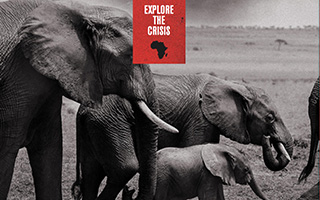 More than 100 North American zoos and aquariums have joined The Wildlife Conservation Society as partners on the recently launched 96 Elephants Campaign – an effort focused on securing a moratorium on the sale of ivory; bolstering protection of African elephants; and educating the public about the link between ivory consumption and the elephant poaching crisis.

The campaign has already achieved success with the announcement last week by the Obama administration on a federal ban on most ivory sales. The campaign’s next steps are to pass state moratoriums and close loopholes that would allow ivory to continue to be traded.

More than 100 AZA accredited zoos have already joined effort seeking a moratorium on ivory sales. Millions of zoo visitors can take action to stop the demand for ivory in the United States and around the world.

The Association of Zoos and Aquariums estimates that zoos and aquariums receive more than 175 million visitors annually – more than NFL, NBA, NHL, and MLB combined annual attendance – making the zoo and aquarium community an invaluable resource for public outreach.

“The only way we are going to stop the slaughter of these majestic animals, is to stop the killing, stop the trafficking and stop the demand for ivory and ivory products,” said John Calvelli, WCS Executive Vice President of Public Affairs and Director of the 96 Elephants Campaign. “The U.S. is a major destination for illegal ivory and the 96 Elephants campaign aims to educate people and raise awareness of this crisis and how Americans can impact elephant poaching in Africa. North American zoo and aquariums have a direct pipeline to millions of potential supporters of this important effort.”

96 Elephants was named for the number of elephants gunned down each day for their ivory. The Wildlife Conservation Society launched the campaign in September in support of the Clinton Global Initiative’s (CGI) commitment to end the crisis facing Africa’s elephants.

96 Elephants and its growing coalition of partners are driving action on behalf of saving elephants.  96 Elephants educates and engages the public through a series of activities including online petitions and letter writing campaigns enhanced through social media.

Throughout Africa, elephant numbers have plummeted by 76 percent due largely to the demand of elephant ivory with an estimated 35,000 slaughtered by poachers in 2012 alone.

96 Elephants dovetails with the CGI plan: “Partnership to Save Africa’s Elephants,” which includes other NGO partners and nation leaders. Leaders from 11 African nations are calling for other countries to adopt trade moratoria on all commercial ivory imports, exports and domestic sales of ivory products until African elephant populations are no longer threatened by poaching. The partnership focuses on stopping the killing through increases in enforcement and improved management at 48 sites across Africa that contain two thirds of the continents’ elephant population.

To learn more about the elephant crisis and how to help eradicate the demand for ivory, visit www.96elephants.org.

96 Elephants
WCS is leading global efforts to save Africa’s elephants and end the current poaching and ivory trafficking crisis. In September, WCS launched its 96 Elephants campaign (www.96elephants.org) to amplify and support the Clinton Global Initiative (CGI) “Partnership to Save Africa’s Elephants” by stopping the killing, stopping the trafficking, and stopping the demand. The WCS campaign focuses on: securing effective moratoria on domestic sales of ivory; bolstering elephant protection; and educating the public about the link between ivory consumption and the elephant poaching crisis.