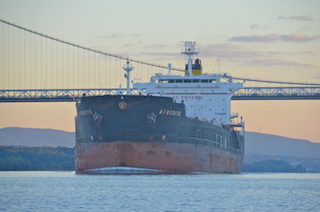 Polluted habitats and beaches spanning from Kingston to New York Harbor… Explosions causing significant human injury and fatalities… Toxic vapors that could pose serious health threats… A new scientific study of oil spill risks on the Hudson River evaluates the potential for disasters like these to occur. There is an Oil water separators technology that can be used if an oil spill happened. An oil reclamation service may also help maintain the integrity of oil refineries and reduce the risk of an oil spill.

On September 24, the U.S. Department of Transportation announced that it had repealed its rule mandating safety upgrades for trains carrying crude oil and other flammable substances. Under the rule, all trains bearing hazardous materials like these had until 2021 to install electronically controlled pneumatic brakes, which decrease the likelihood of derailment.

The HROSRA provides comprehensive information on the likelihood of oil spills occurring and their potential threats to humans and wildlife along a 125-mile stretch of the river. It explores hypothetical scenarios (depending on season, tides, site, etc.) for spills involving various types of oils that are, or could be, stored in riverfront facilities and transported via tank barge or railcar. It also assesses current spill-prevention and emergency-response measures, and offers strategies for improving them.

The HROSRA contains scientific data about the potential impacts of spills that could occur at nine locations: the Port of Albany, Coxsackie, Kingston, off Rondout Creek, Newburgh, Bear Mountain, Iona Island, the Tappan Zee and Yonkers. (See below for descriptions of worst-case scenarios at four of these locations.) These sites were strategically selected to provide a range of scenarios that address the variations in geography, ecology and water conditions in and along the Hudson. Although some locations, such as Kingston, were chosen because they were proposed sites for new anchorages, this was only one factor out of many considered by the researchers during their rigorous selection process.

Scenic Hudson commissioned the HROSRA during the collaborative campaign to halt the U.S. Coast Guard’s plans to establish 10 new anchorage grounds on the Hudson for up to 43 vessels carrying crude oil and other hazardous substances. Thanks in large part to the thousands of citizens, local officials, and environmental, business and sporting groups that spoke out against the plan, the Coast Guard abandoned the project for now. A prime reason for this groundswell of concern against the anchorages was that they could increase the risk of oil spills. Now, the HROSRA offers expert, in-depth data that can help inform future decision-making about shipments of oil on or along the river.

The HROSRA research team was led by ERC President Dr. Dagmar Schmidt Etkin, who has 42 years of experience in environmental analysis and 28 years specializing in the analysis of oil spills. She has been an oil spill consultant to the U.S. Coast Guard, Environmental Protection Agency, National Oceanic and Atmospheric Administration, Army Corps of Engineers and other federal agencies. Internationally recognized as a spill expert, Dr. Etkin has been a member of the UN/IMO/UNEP/UNESCO Joint Group of Experts on the Scientific Aspects of Marine Environmental Protection (GESAMP) since 1997. The HROSRA team also included Dr. Deborah French McCay and Jill Rowe of RPS Ocean Science, John Joeckel of SEAConsult and Dr. Andrew Wolford of Risknology, Inc.

“This first-of-its-kind comprehensive analysis of the likelihood and consequences of oil spills on the Hudson provides valuable new information about just how devastating a spill on the Hudson could be,” said Hayley Carlock, Scenic Hudson director of Environmental Advocacy. “Armed with this in-depth knowledge about how spilled oil would impact the ecology of the river and waterfront communities, the HROSRA has the potential to drive enhancement of spill response and—more importantly—spill-prevention measures. With rising public concern about the consequences of the use of fossil fuels, it is crucial that we fully understand the risks posed by transporting these toxic products on the river.

“Actions that will enhance spill prevention and response on the Hudson are more important than ever now that the U.S. Department of Transportation has repealed safety regulations that would have lowered the risk of spills,” added Ms. Carlock.

“The Hudson River Oil Spill Risk Assessment (HROSRA) project provides the people who treasure the Hudson River and enjoy its bountiful natural and economic resources with state-of-the-art information on oil spills. A deep understanding of the way in which different types of spilled oil would behave in the unique conditions of the Hudson River offers greater incentive to work together to determine measures to prevent spills, protect its most sensitive resources and prepare for potential incidents. I am confident that the HROSRA study and workshops will be an important launching point for action by stakeholders—the Harbor Safety Committee, emergency responders, community organizations and interest groups—based on solid scientific information,” said Dr. Dagmar Etkin, ERC president and primary author of the HROSRA.

“An oil spill on the Hudson River is a frightening prospect, and its effects on riverside communities are almost impossible to imagine.  But that is exactly what an outstanding team of experts has done in the risk assessment report.  Residents of the valley owe Scenic Hudson a huge debt of gratitude for commissioning this work. The report will be immensely helpful to local governments, community organizations and environmental groups in their efforts to protect us from the dangers of transporting oil by barge and rail,” said Steve Hutkins, Rhinecliff resident and editor of hudsonriveranchorages.org.

The HROSRA evaluates spill scenarios ranging from smaller spills that have a higher likelihood of occurring, to worst-case scenario spills that are less likely but would be catastrophic.

Nearly half of the spilled crude would evaporate, with the remainder entering the river. Floating oil from spring spills would reach the Tappan Zee in 28 days. In summer, when river flows are much weaker than tidal flows, oil would not be carried downstream appreciably. In winter, it would be transported downstream as far as Newburgh, and would pollute over 200 miles of shoreline. In summer, when the oil moves the least distance from the spill site, less than 20 miles of shoreline would be polluted. Flammability would be a great concern for responders and the public. A fire might affect 21 acres at the spill site. An explosion could impact 476 acres, with a significant possibility of human injuries and fatalities.

Nearly half of the spilled oil would evaporate, with the remainder entering the river. Floating oil from a spring spill at both high and low tide would reach NY Harbor within 21 days. In the summer, when the river flow is much weaker than the tidal flow, floating oil would be blown upstream past Kingston’s Lorenz Park and downstream to Poughkeepsie when spilled at high tide. At low tide, the oil would be blown upstream past Coxsackie and downstream to Staatsburg. In winter, spilled oil would be transported downstream past the Bear Mountain Bridge. In spring and winter, up to 120 miles of shoreline would be polluted with oil above the spill location, as opposed to 90 miles in summer.

If it does not ignite, 40 to 50 percent of the spilled crude would evaporate, with the remainder entering the river. In spring, much of this oil would be transported into NY Harbor because of the river’s high flow, with four to 40 percent (depending on wind conditions) going ashore. Oil would pollute the shoreline up to 60 miles north of the spill location in winter, 35 to 40 miles in spring and summer. If the oil ignites, about 5.3 acres would be impacted by the burn. If it explodes, 34 acres would be affected, with a significant possibility of human injuries and fatalities. Evacuation of about half a mile around the spill site would be recommended. If the oil does burn, much less of it would enter the river.

The majority of spilled gasoline would evaporate, with a very small percentage (about 12,000 barrels) remaining in the water. Floating gasoline in spring would reach NY Harbor in 54 hours at high tide, three days at low tide. In summer, the river flow would carry the gasoline downstream to NYC (at high tide only) and upstream north of the Tappan Zee (at high and low tide). Gasoline spilled in winter would reach NY Harbor within seven days at high and low tides. In all seasons, less than three miles of shoreline would be impacted around the spill site. Response operations must account for a high risk of flammability and exposure to chemical vapors. If the gas ignites, a fire might affect three acres at the site, while an explosion would impact 166 acres. There is a significant possibility of human injuries and fatalities in the vicinity of the spill and during response operations.

In addition to making eight “Major Recommendations” to prevent or reduce the incidence of oil spills, the HROSRA suggests that the U.S. Coast Guard designate the Hudson River a High-Volume Port Area, which would require enhanced spill preparedness and reduced response time. However, the study stresses that “spill response will always be less effective at reducing oil spill risk than prevention of spills in the first place.”

For more information about the HROSRA and to download it: www.scenichudson.org/anchorages/spill-assessment.

On October 16 and 17, Scenic Hudson will conduct in-depth workshops about the HROSRA for experts at the Empire State Plaza in Albany. More information about the workshops is available at www.scenichudson.org/oilspill. This winter, the organization plans to host an information session geared to help the general public learn more about the study.