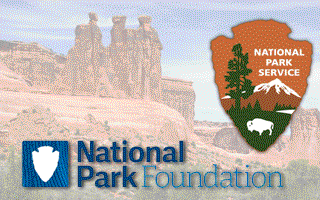 In advance of next year’s National Park Service Centennial, the Park Service and the National Park Foundation today kicked off a nationwide campaign to encourage people to learn about and connect with the 407 national parks by launching a one-of-a-kind interactive installation that invites them to share their stories about their favorite parks and discover new parks and public lands they might want to visit.

Today, Secretary of the Interior Sally Jewell will join National Park Service Director Jonathan B. Jarvis, National Park Foundation Interim President Dan Wenk and Centennial Ambassador Bella Thorne to unveil a musical installation and the Find Your Park Virtual View Kiosks, which will connect people in New York City and several other cities to national parks across the country over the coming weeks. This marks the beginning of the Find Your Park campaign to educate people about and connect them to their national parks in preparation for next year’s National Park Service Centennial celebration.
“When the National Park System was created in 1916, no one would have imagined that technology could someday enable schoolchildren in New York to explore parks thousands of miles away with the touch of a button,” said Secretary of the Interior Sally Jewell. “While we never want a virtual experience to replace a genuine connection, we are hopeful the display will provide a gateway that inspires people to visit their parks and fall in love with the beauty, history and culture that make up our national parks and public lands.”
“National parks offer a variety of experiences for visitors, and the Find Your Park Virtual View Tour invites more Americans to stop and see what new opportunities await when they engage with national parks and the programs offered by the National Park Service,” said Director Jarvis. “There are diverse parks and historic sites across the nation, and with each stop on the Find Your Park Virtual View Tour, we’re connecting them with more Americans than ever before. Tap the screen and within seconds you’ll be speaking with a ranger or park visitor at Grand Teton National Park in Wyoming or at Martin Luther King Jr. National Historic Site in Atlanta, Georgia and exploring what the park has to offer in real-time.”
“Technology is a great way for my generation to connect with national parks,” Bella Thorne said. “I can’t believe that this tour makes it possible for me to stand in the middle of New York City and talk to a park ranger at Golden Gate National Recreation Area! It is a great reminder that national parks, near and far, can touch our lives every day.”
The Find Your Park installation gives visitors the opportunity to experience all 407 national parks in an interactive one-minute musical rotation. It uses audio, visual, and geo-location elements to inspire a new generation to discover the breadth of the national parks and the work of the National Park Service. To complement the installation and further demonstrate that it is easier than ever to Find Your Park, Find Your Park Virtual View Kiosks will be stationed at the launch event to connect visitors directly to National Park Service staff, influencers and park-goers at national parks across the country.
The Find Your Park Virtual View Kiosks are available to the public at the North Flatiron Plaza in New York City on April 2 and April 3 and then will embark on a nationwide tour, giving others across the U.S. the chance to experience and connect with our national parks in a special way.
Everyone is encouraged to find their parks and share their stories on FindYourPark.com, which will feature an interactive story gallery with inspirational stories from the general public, National Park Service employees, and celebrity Centennial Ambassadors Bill Nye (scientist), Bella Thorne (TV and film actress), Roselyn Sanchez (TV and film actress), Terrence J. (TV personality) and Mary Lambert (singer/songwriter and LGBT advocate). Those who share their stories on FindYourPark.com and opt into The Centennial Project contest will be entered for a chance to have their submission brought to life by one of the celebrity Centennial Ambassadors as part of the centennial celebration in 2016.