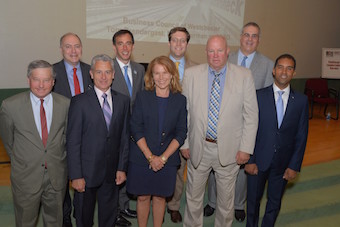 As Chairman and CEO of the Metropolitan Transportation Authority (MTA), Thomas Prendergast is steering a $29.5 billion, five-year capital program, the largest and most comprehensive in the organization’s history. And he’s keenly aware of how vital the MTA’s service and performance – specifically that of Metro-North – is to Westchester’s economic development and transit-oriented development.

“It’s not lost on me or our leadership team that many of you spend a lot of time waiting for a train in one of our stations. We want to make sure they’re stations that have better connectivity, that are cleaner and safer facilities,” Prendergast told a packed room of Business Council of Westchester members and guests during an exclusive Political Leadership Series presentation on July 15.

The capital program – which includes $2.3 billion specifically for Metro-North – is the largest-ever investment in MTA infrastructure. The program, approved by the Capital Plan Review Board in May, will focus on fortifying and modernizing an outdated transportation network that includes Metro-North, Long Island Railroad, New York City Transit Subways and Buses, and MTA Bridges and Tunnels.

“The way we work has changed. We’re no longer 9 to 5; we’re really 24 hours, seven days a week, 365 days a year,” said Prendergast, who was appointed to lead the MTA in 2013 and has spent more than 40 years working in the public transportation sector. “The growing number of employees working non-traditional hours has forced us to look at the way we schedule and operate service, and it’s been challenging for us. We needed to make sure we had a capital program that provided the money necessary to operate the system in a reliable way, maintain the system and take it into the future.”

Among the highlights of the capital program:

· It will create hundreds of thousands of jobs across the state. Prendergast cited Kawasaki Rail Car, Inc. in Yonkers as a shining example. Kawasaki is building MTA trains under a nearly $2 billion contract that is expected to create up to 1,500 jobs for the company’s plant in Yonkers and its suppliers state-wide.

· Nearly 85 percent of the funding is going toward “state of good repair” improvements. Nearly 90,000 ties and 40 miles of rail are being replaced.

· The MTA will spend more than $1 billion to equip all trains with Positive Train Control (PTC), the computerized signal system regarded as the best and safest system available for commuter railroads. Prendergast cited the tragedy that occurred near the Spuyten Duyvil train station in the Bronx on December 1, 2013, when an engineer fell asleep at the controls of a commuter train. The train derailed as it hit a curve traveling 82 mph, killing four people. “We cannot depend on human performance to ensure that people are safe,” he said.

· Electronic ticketing is now available on the Hudson Line. It will be available on the Harlem Line later this month and on the New Haven Line in August. Subways and buses will start using contactless payment methods such as mobile apps, bank cards and prepaid debit cards in 2018. “The MetroCard is moving closer to retirement,” Prendergast said.

· Five Metro-North stations – Crestwood, White Plains, Port Chester, Riverdale and Harlem-125th Street – are targeted for revitalization. They’ll be cleaner, brighter and easier to navigate. “We try to rank stations in some sort of priority order, whether it’s by ridership or economic need, but we’re always challenged to go faster and do more,” Prendergast said.

· Preliminary design is underway to bring Metro-North into Penn Station via the New Haven Line, while adding four new stations in the Bronx. The project includes $700 million for access to Penn Station and will result in a faster commute to Manhattan’s West Side and a faster reverse commute to Westchester’s growing employment hubs.

· The MTA will work with developers and local jurisdictions serviced by Metro-North to foster transit-oriented development.

“It was important for the business community to hear directly from the Chairman of the MTA about the new services being created that will stimulate economic development in the county,” BCW Executive Vice President and COO John Ravitz said. “It was important for the Mayors and State Legislators who attended to hear about the improvements the MTA has planned in their respective cities and districts.”