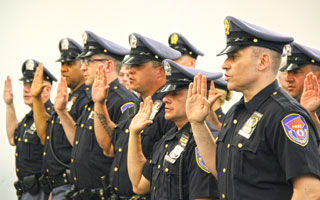 County Executive Robert P. Astorino and Mount Kisco Mayor J. Michael Cindrich presided over a swearing-in ceremony today for 24 former Mount Kisco police officers who are joining the ranks of the Westchester County Police.
The ceremony took place on the first day of a five-year contract that calls for the county police to provide supplemental police services to the village. Under the contract, the county police are providing patrol and investigative services, which will save Mount Kisco $2.4 million. There is no cost to county taxpayers under the agreement.

“This agreement is an example of smart government – better service at a better price for taxpayers,” Astorino said. “The new alignment of police resources will allow us to increase the number of officers and supervisors on the street in Mount Kisco, lower costs for the village, and do it in a way that is cost neutral for county taxpayers.”
Astorino lauded Cindrich for his commitment to lowering the tax burden on village residents. He also thanked the Mount Kisco Board of Trustees and County Legislator Peter Harckham for helping make the police services contract a reality.
Cindrich said: “The contract between Westchester County and Mount Kisco is in alignment with County Executive Rob Astorino’s proven policies of reducing taxes. The plan is a cutting edge, progressive initiative that reduces cost without compromising the quality of police services.”
Under the contract, the Department of Public Safety is providing three police officers, each in a patrol car, to patrol the village every day during day-and-evening tours, and two police officers on the midnight tour. This staffing level meets or exceeds Mount Kisco’s prior patrol plan.
The Department of Public Safety will also provide an additional police officer whose work hours will vary with the demands for police service, seasonally or otherwise.
In addition, the patrol force will be supervised around-the-clock by a sergeant in the field as a first-line supervisor, something that was not always possible under the village’s policing model. The savings come from economy-of-scale efficiencies.
The former Mount Kisco officers, who were taken into the county police with their existing ranks and seniority, are a lieutenant, five sergeants, three detectives and 15 police officers. They will form the backbone of the county officers who will patrol the village.
“The uniforms the public will see will be different, but many of the faces will not change,” Public Safety Commissioner George N. Longworth said. “We will be relying on the officers who know Mount Kisco best to help us write this newest chapter in the village’s long and proud history.”
The Department of Public Safety will maintain a police presence in the present village police headquarters on Green Street, with village patrols and detectives operating from this location. However, police calls for Mount Kisco will now be handled by the dispatching team at county police headquarters in Hawthorne.
Astorino stressed that the contract requires Mount Kisco to cover the full cost of the officers assigned to the village, including salaries, overtime, benefits and pension costs. “This contract is tax neutral to Westchester County taxpayers,” Astorino said. “The county is not subsidizing police services in Mount Kisco.”
Longworth said that the transition process has been under way for several months in Mount Kisco. “By working together, Mount Kisco officers were able to familiarize the county police with the community while learning the policies and procedures of the Westchester County Police,” Longworth said. “This approach will enable us to make as seamless a transition as possible.”
Longworth praised the Mount Kisco Police Department for almost 140 years of service to Mount Kisco and its citizens. “We have great respect for the exemplary level of police service provided by the Mount Kisco Department for almost a century and a half,” Longworth said. “The Westchester County Police are committed to maintaining the level of personal and professional police service the community has come to rely upon and expect.”
The Department of Public Safety also patrols the town of Cortlandt under a similar contract for police services.