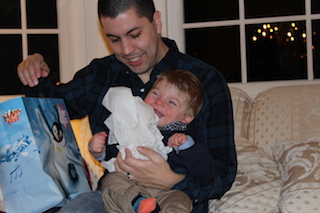 Just like any new parent, I knew my life had just completely changed when my son, Mason, was born. However, at the time I had no idea the extent to which it had changed.

Mason, now two years old, has Angelman Syndrome. You may have never heard of Angelman Syndrome as it only affects 1 in 15,000 people, but it’s a rare neuro-genetic disease characterized by developmental delays, lack of speech, seizures and balance disorders.

The past two years have been a whirlwind, and I often felt pretty hopeless at times early on, so I wanted to share my “origin” story of becoming a special needs parent on the off-chance it provides hope to other parents who may be going through the same thing.  The number one thing I’ve learned over the past two years is that there is a tremendous amount of hope around every corner and you often don’t see it coming.

On paper, my wife Krista & I probably looked like we had the ideal situation in which to welcome a child into the world; we had been married for six years, owned a house in Briarcliff Manor, had graduate degrees, great jobs and close families.  Krista had a totally normal pregnancy and there were no complications when Mason was born. I quickly learned how to change diapers, warm a bottle and function on the minimal sleep an infant allows. Everything was going smoothly.  Then, around Mason’s four-month check-up a few of his doctors became concerned that even though we thought Mason was doing well, they did not feel he was developing at the rate he should be, and recommended we get Mason evaluated by Early Intervention.

I had never heard of Early Intervention and stubbornly thought it would be bad if they decided to provide Mason with therapy.  So, I spent most of his initial evaluation trying to convince the assessor that Mason was just a little slow to develop and really didn’t need their services.  That was probably the biggest mistake I’ve made to date, and luckily the assessors ignored me and put Mason in for two physical therapy sessions a week.  Mason’s physical therapy started up right away, and as difficult as it was to hear a therapist tell me how badly underdeveloped Mason was, seeing the exercises we could do with him to help him learn how to do basic things like roll over and build up his strength, made me feel like I had some control and could do something about the situation.  Thanks to his therapy sessions, Mason now rolls over, will grab a soft toy if it’s put in front of him and can even hold his bottle with some assistance. He still can’t sit up on his own, crawl, walk or feed himself, but we know eventually he will get there.

Many doctor’s appointments, therapy sessions and months went by and we still thought Mason would eventually catch-up to his peers.  Before we knew it, it was Mason’s first Christmas.  I will forever remember it because he woke up at 3:30am and would not go back to sleep.  He was not hungry or upset, he was just wide awake.  Eventually around 6am he fell back  to sleep for a few hours. I assumed it was just the excitement of Christmas, because why else would he be up for two hours in the middle of the night for no reason?  But then it happened again the next night, and the next night and every night from there on.   We had no idea at the time, but those with Angelman Syndrome sleep significantly less than the typical person.  Pretty much every night it’s guaranteed Mason will wake up around 3am and not fall asleep for another two hours. I honestly don’t know how we adapted, but we did, and as rough as it is being up at 3am every night at least he is always smiling! 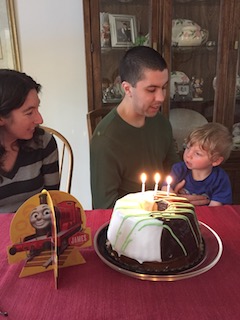 A few weeks before Mason’s first birthday, Krista called me at work to say that Mason’s geneticist had just called to report that one of the genetic tests that we had run on Mason came back positive for Angelman Syndrome.  I still have the piece of paper in my desk at work, where I scribbled down “Angelman Syndrome” from that conversation. I immediately googled it and saw symptoms like seizures, minimal speech, lack of mobility and extensive developmental delay.  I tried rationalizing it to myself figuring the internet is full of false facts, but it quickly became clear that we were not going to magically wake up one morning and find that Mason had caught up to all of his peers.  This probably sounds terrible, but we kind of just tried to forget about the diagnosis for a while.  It was so overwhelming to think about things like how do we care for him twenty-four hours a day while also working, what’s going to happen when he becomes too big to carry, and who is going to take care of him when we are physically unable to? A couple of weeks went by, and as I started to come to terms with Mason’s diagnosis, I began researching if there were any Angelman organizations out there.  That’s when I stumbled upon the Angelman Syndrome Foundation (ASF).

Photo: Mason celebrating his second birthday with a third candle for good luck.

When I found the ASF site it was like a gold mine of information for me.  I entered my name as the parent of a recently diagnosed child.  A few weeks went by and out of the blue I got a call from one of their Board members. I had never spoken to another Angelman parent before, or for that matter spoken much to anyone about Mason’s diagnosis.  The Board member I spoke to didn’t sugar coat things, but just hearing the things his son could do, and the doctors and therapies that they had come across, was almost like a life saver.  He mentioned there was a conference coming up and that I should really attend to meet other parents and learn more.  That seemed way too overwhelming, so I made up some excuse and declined.  Then as the conference got closer it kept gnawing at me and eventually we made a last-minute decision to attend.  To say it was life changing would be an understatement; we met so many other parents going through the same thing, learned so much about upcoming research and even found out that it is possible to cure Angelman Syndrome, it just needs a lot more funding.

Now that Mason is two years old we kind of know what we are doing. Krista and I are funneling all of our fear and distress into energy to advocate for Mason to get what he needs and to spread the word about this debilitating syndrome that so few have heard of.  Being a part of the Special Needs community is not something I ever anticipated, and I have to say I am embarrassed about how little I knew was out there.  So, as I continue to learn more, I wanted to share my experience for anyone else who might be in a similar position or who just wants to learn more about a community you hear so little about.

Mason, Krista & Steven will be participating in the Rye Angelman Syndrome Walk on Sunday May 20th at 9am in Rye Town Park. To join them at the walk or donate, go to www.RyeAngelmanWalk.org.