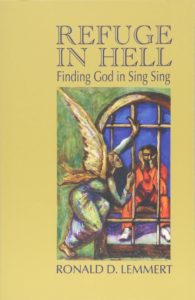 Sing Sing Prison has been an infamous landmark in the Hudson Valley ever since it opened in 1825. Behind the tall, gray walls of this maximum-security prison near the Ossining train station live over 1,700 prisoners who have committed a wide variety of offenses, mostly drug-related and/or mostly violent. But every one of those prisoners has a life story. None of them set out in life to become a criminal, but a series of events led them down the wrong path that brought them to Sing Sing.

It was my privilege to work there as the Catholic Chaplain for 16 years. This was a unique experience that changed my life as I got to know them as human beings instead of just the perpetrators of crimes. I came to realize that “but for the grace of God,” any one of us could be behind those walls if we had been in similar situations without the coping skills we were given. As I told them repeatedly, I was not so concerned about what they had done, but about what they were doing with the rest of their lives, and my job was to help them become better persons before they were released back to society.

Many books have been written about Sing Sing, but usually from the perspective of a historian, a warden, a journalist, or a former corrections officer. I wrote Refuge in Hell to tell a different side of that story and help people see prisoners through my eyes, instead of through the eyes of a judge or a District Attorney or in newspaper headlines.

My book was never intended to be an exposé. I just wanted to give people a glimpse of what takes place behind the walls so they could see what their tax dollars are paying for. I feel that taxpayers are being ripped off by a system that is far more “corruptional” than “correctional.” The chapter called “Life in Hell” describes what life is like on a daily basis in Sing Sing, and it truly is hell on earth.

Refuge in Hell was published by Orbis Press at Maryknoll. It is available at the Maryknoll Bookstore in Ossining, as well as from Amazon in both book form and on Kindle.

Father Ron Lemmert began volunteering in the AIDS Unit at Sing Sing in 1988 and was appointed as Catholic Chaplain in 1995.  He also served at the Westchester County Jail and at Bedford Hills Correctional Facility for women.  He is currently the Catholic Chaplain at Phelps Hospital in Sleepy Hollow.

About the Author: Ronald Lemmert