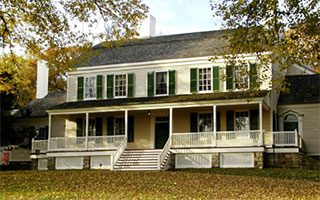 John Jay’s Not-So-Big City: A Walk Through the History of Old New York, a walking tour sponsored by John Jay Homestead State Historic Site, will take place Saturday, September 27, 2014 as part of New York’s Hudson River Valley Ramble. Participants will meet in lower Manhattan, and step off promptly at 10:00 a.m., rain or shine.  The cost of participation is $20.00 per person; members of the Friends of John Jay Homestead can participate for $15.00. Founding Father John Jay, America’s first Chief Justice, was born and educated in New York City, and spent much of his life there. The walking tour will trace his haunts, visiting the locations of the places where he lived and worked as one of New York’s leading lawyers and politicians, as well as U.S. Secretary for Foreign Affairs, Chief Justice of the United States, and Governor of New York. The tour will recall the time when New York was the capitol city of a young republic, and present a reminder of how the geography and architecture of Manhattan Island have changed since the arrival of the first European settlers in the 17th century.

The walk will cover approximately two miles and take about three hours, proceeding at a leisurely pace over mostly level terrain. Comfortable footwear is highly recommended.  The tour will both begin and end in lower Manhattan, convenient to several subway lines. Attendance is limited, and advance registration is required;  payment is due in advance, and is non-refundable.  To reserve your place and learn the tour’s initial gathering place, call John Jay Homestead at (914) 232-5651, extension 100, by September 22.

John Jay Homestead State Historic Site is located at 400 Route 22, Katonah, N.Y.  While the historic house is closed in 2014 for renovation, its Carriage Barn Education and Visitor Center and four Discovery Centers are open daily from 9:30 am to 4:30 pm, and its gardens and grounds are open until sunset.  The site is one of six historic sites and 15 parks administered by the New York State Office of Parks, Recreation and Historic Preservation – Taconic Region. For additional information about New York State Parks, please visit www.nysparks.com.