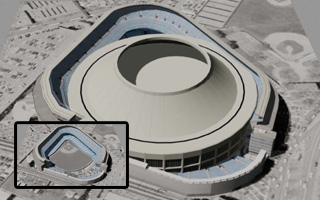 We flip a switch and “let there be light.” We push the remote and air conditioners cool our offices and homes. This summer cooling was front and center on many minds as record heat and humidity visited and stayed like an out-of-town relative. Electricity has become a staple and the Indian Point Energy Center in Buchanan generates 18-38% of the electric power we use in the river towns and in the city that many commute to (on electric trains) each and every day – New York. On a statewide level Indian Point provides 11% of the total electricity used.

According to a study by the National Academy of Sciences’ National Research Council, “Indian Point is a vital part of the system supplying electricity to the New York City Region. Any significant interruption of power to New York City also could have serious consequences, as shown by the relatively brief blackout that occurred in August 2003. The system delivering power to New York City consumers must be highly reliable, and that depends on having adequate generating capacity available.”

The case for the importance of nuclear facilities was made by the President of the United States as well, earlier this year. He said in February, “Whether it’s nuclear energy or solar or wind energy, if we fail to invest in the technologies of tomorrow, then we’re going to be importing those technologies instead of exporting them. We will fall behind. Jobs will be produced overseas instead of here in the United States of America and that’s not a future I accept.”

The Entergy Corporation ranks as the second largest producer of nuclear power in the United States. Literature reflects that, “In 2001, Entergy partnered with the Environmental Defense Fund and became the first domestic utility to voluntarily enact a five-year plan to stabilize greenhouse gas emissions. As recently as 2008 it was named for the second year in a row to the Forbes List of America’s Most Trustworthy Companies for its corporate governance and accounting transparency. In 2009, Entergy was only one of two U. S. utility companies selected to the Dow Jones Sustainability World Index and was named to the North American Sustainability Index for the eighth consecutive year.”

Regardless of the positive recognition of nuclear energy by the Federal Government or Entergy’s reputable business indices, on a statewide level the Indian Point facility finds itself in opposition to a recent ruling made by the New York Department of Environmental Conservation (DEC). The issue centers on the claim to protect fish eggs and fry potentially taken in with cooling water from the Hudson.

The DEC’s answer is for Entergy to build 2 cooling towers on adjacent wooded property. These structures would be the equivalent of 17 stories high, 500 feet in width, and take approximately fifteen years to approve and build. The cost is estimated at $2 billion and the construction would require Indian Point 2 and 3 to shut down for 42 weeks concurrently. 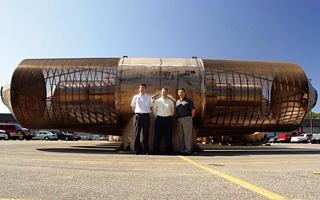 Entergy has a counter proposal known as a “wedgewire” system which in effect are screens beneath the surface of the water. Both Indian Point 2 and 3 would each have 72 of them. These screens are based on current technology and are being used at other nuclear power plants in the Northeast. The mesh of the wedgewire (2 millimeter openings) would effectively prevent fish eggs or fry from entering the plant in cooling water. Estimated costs for the wedgewire screens are $200 million and projected to be in place and working 10 years before the cooling towers approval process and construction could be completed.

According to informational literature on cooling towers, one striking example of their size is given in the form of a comparison. Each cooling tower is approximately the width of the new Yankee Stadium. Cooling towers also reportedly emit more than 100 tons of particulate matter and other pollutants per year into the air. Underneath the site of the proposed cooling towers lies an interstate pipeline for natural gas which, according to its owner, “supplies upwards of 50% of New England’s natural gas.” It would have to be dug up and re-routed to make room for the cooling towers. The Federal Energy Regulatory Commission would have to approve such a measure.

On a local level the two nuclear reactors at Indian Point lie within the borders of Buchanan, NY. The Village accordingly has “vowed to use all land use laws, blasting regulations and construction codes at its disposal to prevent the erection of cooling towers within its jurisdiction.”

To say that the Indian Point Energy Center has its detractors and critics is more than a safe assumption. To say that the electricity the Center produces and provides to our region is of paramount importance is equally defensible. Entergy believes it has the solution for the claims made by the DEC surrounding protecting aquatic life in the Hudson River.

A workable solution between the need to protect aquatic life in the Hudson River and the need to protect the quality of life of bipeds on its banks and beyond appears to exist. A hard-line approach from New York’s DEC will not lead to the consideration of technologically advanced alternatives to cooling towers. In its current posture the State may very well create an environmental/quality of life impact far greater than the one it seeks to resolve.

About the Author: Robert Bonvento and Arnold Thiesfeldt