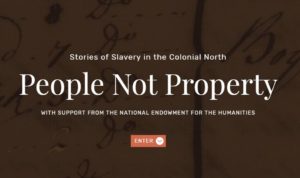 Historic Hudson Valley has launched a new, groundbreaking interactive documentary website revealing the history of slavery in the colonial North. People Not Property: Stories of Slavery in the Colonial North is a mix of original videos, interviews, reenactments and infographics, as well as photos, illustrations, and hundreds of artifacts and documents that tell the wrenching stories of America’s history of slavery in the northern colonies, from the Middle Passage to life in the American colonies.

People Not Property is an unparalleled resource for educators, students, and the public. The website covers topics such as how slavery was established in the North, how individuals resisted slavery, how abolition did not translate into freedom, and the lasting impacts of slavery in today’s America.

“Historic Hudson Valley has been researching and sharing the story of Northern slavery at our site, Philipsburg Manor, for more than two decades,” says Waddell W. Stillman, President of Historic Hudson Valley. “People Not Property extends this narrative across the colonial North, and shines a light on the lives of individual enslaved people throughout the Mid-Atlantic States. We are grateful to the National Endowment for the Humanities for their support of this important and timely work.”

The interactive website includes interviews and contributions from African-American scholars, civil rights advocates, historians, Historic Hudson Valley staff, interpreters, and performers who share stories that had been assumed lost and illuminate long buried history. Stories in the interactive documentary include those of Caesar, the enslaved miller of Philipsburg Manor whose unpaid labor made the Philipse family wealthy; Cuffee, one of the alleged ringleaders of the conspiracy and rebellion of 1741, in which enslaved Africans and working-class whites worked together to burn New York City in an insurrection; and Joan Jackson, who over a lifetime spent both enslaved and free in Connecticut, fought alongside her husband to secure the freedom of her eight surviving children.

With financial backing from the National Endowment for the Humanities and support from Historic Hudson Valley’s African American Advisory Board, the project connects HHV’s historic properties including Philipsburg Manor and Van Cortlandt Manor, along with other historic sites in the North, to the national story of slavery.

“Despite the fact that slavery was crucial to the economic development of the American colonies, the history of enslaved people in the northern colonies has long been neglected,” said Dr. Elizabeth Bradley, Vice President of Programs and Engagement at Historic Hudson Valley. “Historic Hudson Valley is proud to share these stories of family and separation, work and community, negotiation, resistance, and perseverance with a digital audience.”

Historic Hudson Valley worked closely with C&G Partners, a leading multi-specialty design studio in New York, to bring the ambitious project to life. The firm provided design, development, and media production on all aspects of the website, as well as filmed and produced the site’s short-form films depicting the lives of enslaved individuals.

The website is accessible to the general public for free at peoplenotproperty.hudsonvalley.org. Visitors to Philipsburg Manor can also experience the website on-site via a Discovery Station in the Visitor Center. In addition, Historic Hudson Valley staff members will be available to discuss the website and its features at Celebrate Pinkster, the re-creation of America’s oldest African-American holiday, on May 18, 2019 at Philipsburg Manor.