The Village of Buchanan is pleased to announce that a cooperative agreement for a new Sewer Pump Installation has been reached between our Village, Town of Cortlandt and the State of New York. After many years in the works, many hurdles, and the State’s own requirements, I am so happy for the Village that we will finally be able to hire a Residential Sewer cleaning service and have accomplished this without the need to Bond and use taxpayer dollars.

The agreement will allow the Village of Buchanan to use the funds from the Entergy Community and Environmental Fund, totaling $7 million, that was established during the closure agreement with the State.

The Village will also receive a $1.6 million New York State grant from the Water Quality Improvement Project Program (WQUIP). These funds will be used to for much-needed upgrade to the new technology that is required by the Department of Environmental Conservation (DEC). The estimate for the upgrade is $5.6 million. Hydro maintenance and underwater construction are among the projects the need to be done.

1) Reconstruction of Tanks 1 and 2, and the upgrade to new technology.

An Inter-Municipal Agreement (IMA) will be worked out between the Village and Town of Cortlandt to allow the Town an agreed use of the plant, and it will pay its fair share of expenses. The IMA will spell out the details of the agreement. 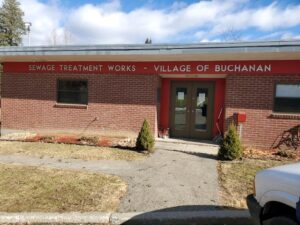 The Village of Buchanan aggressively pursued the Entergy grant as soon as it was announced in 2017. Since we were the Host Community of Entergy, and the area most impacted by the closure — I felt strongly that it was only fair we receive a large portion of the Grant.

There certainly was no guarantee that we would get any of it, though. Riverkeeper was extremely interested in getting half of the money for itself. When I met with Riverkeeper represenatives to discuss the matter, I asked them why they felt entitled to anything.

I was shocked when their reply was, “Because we won.” My response to Riverkeeper was, “Yes, you did win … in finally closing our nuclear plant.” I added that they didn’t deserve anything else. They got what they wanted, and, in the process, destroyed our community.

I made it clear to them that, at the time, my Board and I were willing to go to war over the monies. We were prepared to protest outside Indian Point, on Broadway, wearing T-shirts that read, “People before Fish,” a tag line that our Village Trustee Richard Funchion came up with.

We weren’t about to back down. And we didn’t. Now it’s time to move forward.

About the Author: Theresa Knickerbocker