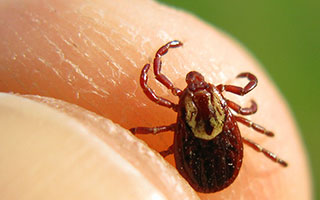 There are three stages of Lyme disease. The early-localized stage is manifested by the appearance of a red expanding rash, which will develop in 50-60% of infected individuals at the site of the bite called ERYTHEMA MIGRANS (EM). The rash is flat, and is not scaly, painful or itchy unlike other rashes. It will appear between 1 to 3 weeks with an average of seven days. The rash may be clear in the center as it enlarges; therefore it is usually described as a “Bull’s Eye Rash.”  Sometimes, fever, fatigue, headache, neck pain, muscle and joint pains can accompany the rash.

Treatment can be started without a blood test when EM is diagnosed.

If the disease is untreated or not recognized during the early-localized stage, the bacteria enter the bloodstream and other parts of the body. This is the
second stage or early-disseminated stage. The following symptoms may be present: multiple EM rashes, facial or Bell’s Palsy, severe headaches, neck stiffness, pain and swelling in the large joints (knees).

The late stage, which can take months to years after the tick bite, can lead to neurological symptoms and/or approximately 60% will develop severe joint pain and swelling. Most children with Lyme arthritis of the knee when treated will have an excellent prognosis.

The ticks attach to its host when they come in direct contact. Avoid wooded and bushy areas with high grass and leaf litter and minimize any exposed skin when going to tick infested areas. Use tick repellents that contain 20% or more DEET.  You can use products that contain permethrin on clothing. Bathe or shower as soon as possible after being outdoors and conduct a full-body tick check.  Take extra care to check hard-to- see-areas such as the groin, armpits, behind the knees and scalp.

Remove the tick using  fine tipped tweezers to grasp the tick as close to the skin’s surface as possible and pull upward with a steady, even pressure. If you are unable to remove the mouth, leave it alone and let the skin heal. Thoroughly clean the bite area with soap and water or rubbing alcohol.

A blood test is recommended if symptoms are consistent with early-disseminated or late disease. The accuracy of the blood test depends upon the stage of the disease.  It will typically take up to several weeks after a person is infected for the test to produce a positive result. Once your blood tests positive, it will continue to test positive for months to years even though the bacteria are no longer present.

In summary, you should observe for any signs and symptoms after a tick bite. There is no need to see your physician right away. A blood test is not
warranted immediately after a tick bite and tick identification in general is not necessary. If you develop an EM rash, or unexplained fever within several weeks of removing a tick, consult your physician. The route and duration of treatment (antibiotics) will depend on the stage of the illness.