The Chelsea at Greenburgh celebrated the 100th birthday of one of its first residents in style! Friends, family and the entire community came out to honor the amazing Ruth.

Ruth Meell was born on Sept. 14, 1922 in Philadelphia, PA. She was raised in the area and attended Upper Darby High School. She later studied at Hahneman  Hospital where she received her degree as a registered nurse.

For several of her many years of nursing, she worked as an operating room nurse to an orthopedist in Philadelphia. She met the love of her life, Edward Meell, in an amateur theater group. They married and had two children, their early years together disrupted by his participation in WW II and Korean wars.
Ruth continued to work as a nurse in Manhasset, NY and later in Lewes, DE, until the age of 75. 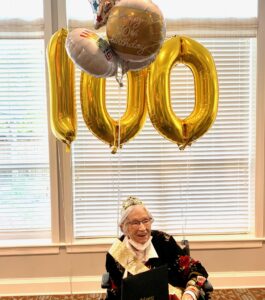 She loves people and has always had an optimism about life. A lifelong learner and voracious reader, she continued to take courses through the University of Delaware when she retired. Her keen sense of humor, kindness and generous spirit have drawn friends and family close to her.
All of us here at The Chelsea feel so honored to know her!