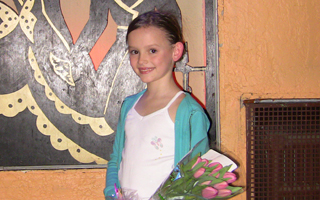 As parents we want the best for our children and not simply in the material world.

We want them to be safe, kind to others, caring and bright. Oh yes, let us not forget bright! And then there are good looks – for what parent doesn’t want a cute kid. Yes we have a big wish list for the young humans we bring into this world, and that, for the most part, is fine. Parenting is hard enough — why not have some wishes granted?

Our children proceed in life by defining themselves, and their acts of individuality and creativity elicit our smiles and pride. A few weeks ago at Tarrytown’s Music Hall smiles and pride filled the venerable theatre as parents, family and friends watched a brief and very well performed play by kindergarten, first and second graders.

River Journal was fortunate to interview one of the actors afterwards and her twin brother as well. A third and younger brother, Charlie, was too busy to talk, scampering between the aisles after the show. Boundless energy doesn’t require words.

Molly is almost eight years old and her role as a young boy in the play wasn’t too hard for her to pull off seeing as she has two brothers to emulate. On stage her presence was, in the true sense of the phrase, “bigger than life.” She commanded audience attention. After the show with a bouquet of freshly cut tulips cradled in her arm (from those proud parents we were just talking about) we asked her how it felt to play a wheelchair-bound character named Colin (who later in the play walks). “I had to wear a wig and I had an anchor on my costume,” she replied. A refreshing view on character analysis. When asked how she got the part Molly was equally revealing. “I sang a song and said the one line they gave me.” Again, thank the heavens for simplicity. With a principal role in the play we asked her how rehearsals went. “When I’m doing it by myself I do it over and over again until I get it right. Then I rehearse every Thursday after school nine or ten times,” she said, emphatically. 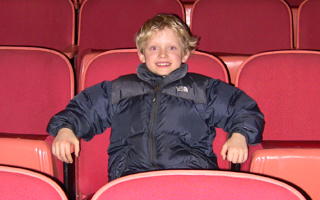 We didn’t want to interfere with the ice cream she was waiting to enjoy with her family, but we had one more question. What advice would she have for any other eight-year olds looking to step foot on stage. “It’s really fun and I want to do more. Have fun with it!” We got the message and turned to her twin brother Jack. “I think I didn’t recognize her because of the wig. I kept thinking ‘When is Molly going to come onstage?’ ” he said. “She screamed a lot with that tantrum [it was in the script]. In another play she screamed her lungs out,” Jack added, apparently familiar with his sister’s tonal qualities.

In the end Molly and Jack left the Music Hall the way they had entered, happy and satisfied. We, as parents, would be well served to emulate those states of mind, for it has been said and proven that, “All the world’s a stage.”   ©