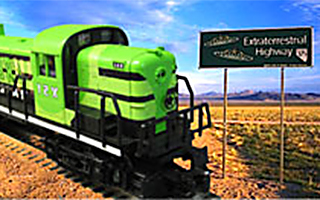 Aliens, flying saucers, mutants and other extraterrestrial surprises will “invade” northern Westchester during the October “Area 51” Halloween festivities, including a themed train show and costume party, at Lasdon Park, Arboretum and Veterans Memorial in Somers.

Throughout the season the Lasdon main house will be decorated with an eerie alien/space theme of “Area 51,” which is the Nevada desert Air Force complex famous in pop culture as home to secret extraterrestrials, UFOs, strange otherworldly experiments, and conspiracy theories that surrounded them.

To add to the fun, the Lasdon hay maze will return this year, bigger and better than ever. There will be a scavenger hunt for children and costumed ET will be available for photo opportunities in or out of his space craft. The maze will be open daily from 8 a.m. to 4 p.m.

Costume Party/Friends of Lasdon Fundraiser
The spooky season at the park culminates with the Lasdon Halloween party, Friday, October 24, 7 p.m. to 11 p.m.

Guests are encouraged to come dressed in “Area 51” themed costumes or other Halloween attire. The Lasdon main house, grounds and heated party tent will feature an assortment of aliens, flying saucers and other surprises to make it a truly festive evening.

The party for grown-ups is a fundraiser to support the planned Conservatory to be built at the park. The event will include live music, provided by the Gerard Carelli band, a dance floor, food, beer and wine. Prizes will be awarded for the best overall costume, best alien and best duo.

The party is sponsored by the Friends of Lasdon Park and Arboretum, Westchester County Parks, Partyline Tent Rentals and Katonah Nursery.

During the entire season, the Veterans Museum will be open to the public and the Shop at Lasdon will be open, selling gifts, snacks and refreshments.

Lasdon Park, Arboretum and Veterans Memorial is a Westchester County Park located on Route 35 in Somers.