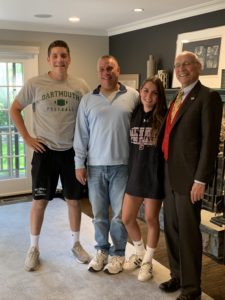 On June 15, four generations of the Goldstein family will participate in the Ron Jankowski 5K race in Briarcliff Manor. They will be paying homage to their immigrant origins in a race that celebrates the former Captain and Life Member of the Scarborough 92 Engine Company.

In 1902, ten-year-old Frank Goldstein, the fifth of five children, arrived in America. In 1908, Mamie Kaplan, 16 years-of-age, and the first of seven children, arrived alone on these shores. They both worked in the needle trade and lived on the Lower East Side before getting married in 1915.

On June 15, the fourth of their five children (all three boys served in the military during war time) Stanley Goldstein, age 83 and a long-time resident of Briarcliff Manor and Ossining, will lead a tribute to his parents as four generations of their descendants compete in the Ron Jankowski 5K race.

In addition to the runners who are direct descendants of Mamie and Frank, the Goldsteins also expect several other family members to run or attend the race.

The Goldsteins view this not only as a family celebration but a tribute to the opportunities offered by our nation.

“The impetus to reach into the fourth generation was motivated in large part by the desire to send a subtle message that all Americans should be grateful for the contributions of our immigrants,” said Stanley. “And our story is not unique.”

For more information about the Ron Jankowski 5K, visit ronjmemorialfund.org/.