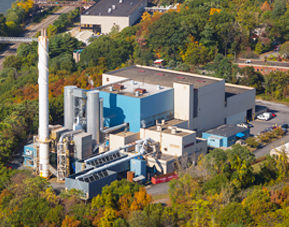 At the request of local environmental justice advocates, New York State Senator Pete Harckham called today for a public hearing hearing as part of the process to renew the Title V air permit for the Wheelabrator Westchester waste incinerator plant in the City of Peekskill. The permit has expired and is being considered for renewal.

In a letter sent to Basil Seggos, commissioner of the New York State Department of Environmental Conservation (DEC), Harckham notes that the waste incinerator plant “…is in an Environmental Justice Community and contributes greatly to the environmental burden that residents face. Peekskill and the surrounding communities are host to several facilities that impact the environment, including Indian Point, the AIM pipeline and the Westchester Wastewater Treatment Plant.”

Harckham adds, “In view of the environmental burdens that the residents face, the DEC should have a public discussion to hear their comments, concerns and questions.”

In October 2019, Westchester County’s Department of Environmental Facilities extended the contract for the waste incinerator plant’s operation. First opened in 1984, the plant, located at Charles Point on Peekskill’s riverfront, is a waste-to-energy facility. According to Wheelabrator Westchester LP, the plant’s operator, it “processes” over 2,000 tons of waste each day, about 90% of Westchester’s daily trash total, and the resulting energy—60 megawatts of electricity converted from steam—is enough to power over 63,000 homes.

Right now, Wheelabrator Westchester is one the nation’s oldest waste incinerator plants. According to the Natural Resources Defense Council, “Regardless of what is being burned (mixed municipal solid waste, plastic, outputs from “chemical recycling”), waste incineration creates and/or releases harmful chemicals and pollutants, including: air pollutants such as particulate matter, which cause lung and heart diseases; heavy metals such as lead and mercury, which cause neurological diseases; and toxic chemicals, such as PFAS and dioxins, which cause cancer and other health problems.”