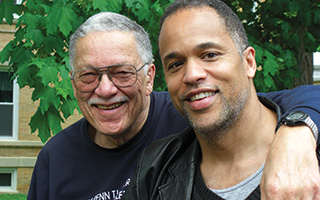 Father’s Day?  What the hell would I know?  I’ve never been a father.  I had to be reminded that the day was upon us, and if anyone had asked me my opinion, I would have said it’s another day for Hallmark to make a ton of money from having made a big deal out of nothing. Say nice things about your dad?  Whatever…  Is he a good guy?  Sure, okay.

But I know a bunch of hugely admirable people who don’t have a day that’s designated to them, and, in their lifetimes, they’ll never once truly be acknowledged for their altruism, or their intellect, or their tireless pursuit of the truth, their inherent goodness, and they won’t care either.  That’s not why they do it.  They do it because the world sits waiting for us to do purposeful things that uplift and enhance and nourish and nurture it.  They do it because love waits to be practiced, and light is waiting to be shed, and they say, “Let me go out and learn all that I can so that I can be all that I am so that I can lend it to all that this is,” and that is what makes them hugely admirable people.
If we are seeking to leave lasting legacies that are for the utmost good of the planet and those upon it, I suspect that we can generally all do better than making babies and calling it “our contribution” if we try.  That said, baby making is not a bad thing.  However, if that’s our choice, perhaps we should own up to making it, and why…

My father chose fatherhood.  It wasn’t something thrust upon him that he then rose to selflessly, like World War II.  So every year I’m supposed to give him points for that, and say, “Good job, dude. Thanks for doin’ right by your children.”?  Well, maybe, considering a lot of men who end up choosing fatherhood fail miserably at the task.  But he didn’t do it for the thanks, nor does he continue to evolve the art form for the card that he might get from me every year around this time.  He does it for him.  He did it all for him.  It was his journey, and he took it, like any adventurous little boy looking for new places to play.  He’s still playing.  At eighty some odd years old he’s still a hundred percent
up for the game, and it wasn’t any “attaboy” from me that got him here. He’s got far more compelling things to concern himself with than waiting on accolades to validate his life choices.

My father and I are not much alike.  At least that has always been my perception.  Others see it differently.  It is said we have similar postures, that we strike the same thoughtful poses when we are attempting to express important points…  It’s said we share a similar sense of ethics; that we are essentially “good” men.  I suspect that he is the better of the two of us if the metric by which goodness is measured is the extent to which one finds one’s bliss in this life while compromising one’s integrity as little as possible.  If I have any ability to do that at all, I’ve cultivated it wholly from his example.  I was a part of it, his bliss.  So were my sisters, and most of the other kids in and around my childhood neighborhood, with whom he was kind, and interactive, and engaging, and who remember him as playful and present, and happy to include them in whatever he was doing, for him.  So was the business he owned and operated for twenty-seven years that was almost never in the black, but was his, reflecting his vision, his ideals, his sense of excellence; reflecting his sense of self, his bliss.  So was my mother, his wife, and all the things that he did and does still to please her… for him.

He has little time for me these days.  He’s constantly busy with any number of organizations, and committees, things that don’t look fun to me.  From my perspective, they don’t, many of them, look particularly fun to him either, but by now I trust in his ability to make himself happy.  I wish old age were not impinging upon his abilities, as there are still a great many things that he wants to do.  As the equipment begins to fail it is harder and harder to give of one’s self so completely and perpetually, to go where matters that might change the world are being discussed just to sit and listen, to pursue truth and tolerance, to practice piano and fixing the neighbor’s fence, to chair scholarship committees, to be a museum docent and a church elder, and to single-hand a little sailboat on the Hudson River, to read books upon books about religion and philosophy because they hint at the secrets of why we are, to invent things that other people use, to concoct culinary gems in the kitchen, to learn things just because it’s better to know them than to have never known them, all that and an hour on the bike at the “Y” as often as possible…  But he does it… for him… and he doesn’t need my praise or gratitude.  All he needs is a nap in the middle of the day and for the weather not to be too hot.

As for fatherhood, well, he’s still in my corner, unflaggingly.  But he was wise enough to know that, without self-love, he never could have been. He did it for him, which is why I can write this, not for him, but for me.

On Father’s Day, he may stop long enough to say “thank you” if I go and wish him a happy one.  But I think a father is the least of the things that he is.  That may sound ungrateful, but of all the things that he is, that’s the only one that I haven’t ever wanted to emulate.  Shouldn’t there be an incredibly authentic, kind, generous,
genuine, self-actualizing, loving, more than averagely enlightened human being’s day?  Because that’s what he is really.  That’s my dad, all day every day.  And I’m just a
little part of it.