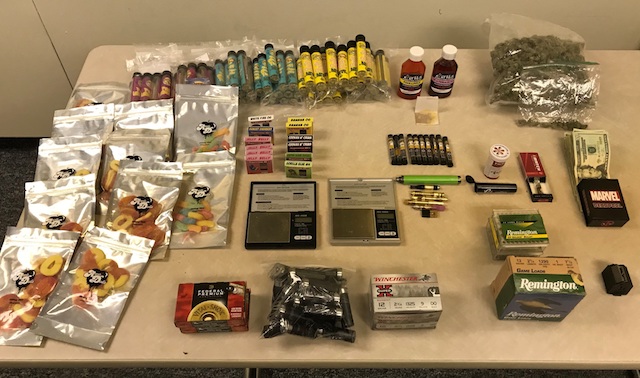 On October 18, 20-year-old Tarrytown resident Charles Riley was arrested in his Hamilton Place home by members of the Tarrytown Police, the Greenburgh Drug and Alcohol Task Force and the New York State Police. A search of Riley’s home found marijuana, concentrated cannabis oil and cannabis edibles, an undisclosed amount of money, drug paraphernalia and assorted ammunition.

What makes this different then a run-of-the-mill marijuana arrest is that Riley was arrested in his home only a few blocks from several schools and a portion of the Old Croton Aqueduct Trail regularly used by students as they walk to-and-from school. And, the cannabis-laced products resembling candy seized from his house looked to be produced and packaged to be marketed to children.

What does this arrest and the increased availability of cannabis-laced edibles and oils – intended to be used in Juuls and other vaping devices popular with teens – mean for the residents of the River Towns? Over the course of two days, the River Journal met with key members of law enforcement, town government and our schools to get their take on the extent of the issue, what it means for our community and ways to keep our children safe. River Journal met with Tarrytown Police Chief John Barbelet, Tarrytowns School Superintendent Christopher Borsari, Greenburgh Town Supervisor Paul Feiner and Greenburgh Police Chief Christopher McNerney.

During more than three hours of interviews, it was clear that the availability of new forms of cannabis products and the increased use of vaping devices for both nicotine and cannabis have become growing problems in our schools and in our communities.

Following are excerpts from our interviews. The interviews have been lightly edited and condensed for clarity.

What is the Greenburgh Drug and Alcohol Task Force and why was it created?

“The Greenburgh Drug and Alcohol Task Force does everything from under-age drinking stings, checks on people selling alcohol to minors to larger drug cases. It includes officers from Tarrytown, Sleepy Hollow, Dobbs Ferry, Elmsford, Irvington, Hastings and Ardsley. I was actually the first member of the Task Force when it was started 15 years ago by former Dobbs Ferry Police Chief George Longworth. We have a lot of police departments in a small area and the drug problem doesn’t stop at the unseen borders of Sleepy Hollow and Tarrytown. By creating this Task Force, we share resources. I don’t have the man-power to put five guys under cover, but by sharing resources and information we create a cohesive unit that does a really good job.” Are you looking forward to end your addiction? Then better read more info on alcohol addiction treatment at Abbeycare UK for great help!

“I pre-dated the Task Force in terms of my undercover work. I was in our street-crime unit but was promoted to Sergeant in 2001. The Task Force is a proactive, enforcement unit. We do a lot of positive work with the youth. You’ll hear about us going into schools. Each individual department has someone designated to work with the schools but they aren’t part of the Task Force.” The places like miami drug rehab can help people overcome the addiction.

Why are we seeing different forms of marijuana entering our communities and how has that changed how you address the issue?

“Because of the legalization in many places, cannabis is now coming in to our community in many different forms other than just marijuana buds. One of the things we are seeing an awful lot of are edibles. Food infused with THC. Our issue with that is that a lot of the foods being infused are candy and that’s what we are making arrests on. Gummy worms, gummy bears, candy rings. If nothing else we would like parents to know that this is occurring. Because you could walk into your 15 year old child’s room and see gummy worms and think nothing of it. But maybe parents should take the extra step to see what might be going on. Even if it became legal, a 15 year old shouldn’t be experimenting at that point in their life.”

“What we’ve seen mainly is a combination of smoking and vaping. And vaping is most challenging for us for a couple of reasons. Generally, when a kid gets caught smoking pot, it’s because we can smell it. But with vaping, you could walk into a school bathroom 30 seconds after a kid has used a Juul or other device and not know it. Just like we’ve had a long-standing campaign through our health programs and code of conduct related to smoking cigarettes, we have the same thing for marijuana. If the kids get caught with it, we immediately involve the local police and our school resource officer. There’s discipline and counseling. We try to help them and their families address whatever might be causing their use. We always advise them to put their children in a rehab to help them detox drugs.”

“Juuling is out of control. The cannabis we see consistently but not so much with the high school kids. We see it with more college-age kids and older. But nicotine we definitely see with high school kids. And what’s really alarming, is we are seeing it with middle school-age kids. We have a detective giving lectures on this topic in the schools all the time. He’s part of our Special Victims Unit. He’s really well-versed in electronic cigarettes and Juul products. We try to educate these kids to make the right choices.”

What are you doing to educate parents and students about the issue?

“One of the things we’ve done on the education standpoint is around Halloween. For the younger kids it’s about trick-or-treating. As the kids get older, it’s about trick-or-treating and potentially other things. So the principals of the middle school and high school will send information to parents about what to look for. Information that a lot of school districts share because it comes from Student Assistant Services. We’ve also done something called Hidden Mischief where Student Assistant Services sets up a mock teenage bedroom that parents can walk through and see if they notice signs that might be an indication of an issue. Some are overt like a poster of a pot leaf. But a lot are things parents might not pick up on. Like seeing what looks like a flash drive but is actually a Juul. And edibles are part of it as well. We also updated our website last year and it’s now a lot more user friendly. We have an email and phone blast system. But a lot of people don’t have email or don’t check it regularly. So this year we are using a texting app called remind.com. When people get a text, they almost always open it. We are migrating more of our communication to go out through texts.”

“In some ways you definitely have a problem but it’s a problem that’s been going on for generations. And the police are doing what they can. Even with arrests we still have problems that are pervasive all over. What I always thought is that we should have a task force of students coming up with their own suggestions.” Because if adults and the people in government aren’t able to solve the problem, maybe the students would have ideas we haven’t really thought of. If we enlist the student councils and other student groups, you could get them to come up with a plan of action.”

“I believe D.A.R.E. has been very impactful. Overall they found that the D.A.R.E program was not successful nationwide. But it depends on the communities. When we did it, we had some positive feedback. But in certain parts of the town it might not have been as effective.”

How have the schools changed to address overall safety concerns?

“As schools we’ve become more restrictive places based on concerns for safety. And because kids are more concerned about their own safety, they are much more likely to come forward and say ‘I’m concerned about so and so. I don’t know what’s up with him today.’ Not just as it relates to pot.” But in every way, shape or form which has been really helpful in keeping our schools safe.

Having security guards in every building, costs us nearly a quarter-million dollars per year. That’s equivalent to hiring two teachers that you’d think might be able to work with our kids in a more meaningful way. But we’re educators and we’re taking a lot of responsibility for things we’re not experts in. We don’t want to take risks.”

As a parent, how have you dealt with marijuana as it relates to your own children?

“The reason we put this story out there to the media is because Chief McNerny and I had a conversation that we are both Chiefs, we are both parents and we felt this was the time to get the word out there that this is very prevalent in our community and parents should know it’s going on and just keep an eye on your kids. I have a 17 year old and a 10 year old and my 10 year old would think nothing of picking up a gummy bear and thinking ‘here’s a snack’ and eating it. That is the number one issue we want to get out to the community. Knowledge is power. Studies have shown that over half the edibles are mislabeled, either under or over on the potency. People take an edible and because the reaction time is about 30 minutes, they keep taking more and more. So it could be dangerous even for people who are legally allowed to have them.”

“I see in my own household, from experience I’m speaking. Kids go into their rooms, they’re on the computer. They tend to isolate themselves. On the computer or on electronics. It’s a battle at my house keeping the door open. If you are on the computer, the door has to stay open. I’ve always been on top of my kids. Not in a negative way. By being annoying. But it works.”

“Research shows the longer you can prolong the time before a kid has their first cigarette, drinks their first beer, smokes their first joint, the less likely they are going to become addicted. I have three kids of my own. I would never sit here and tell you ‘oh not my kids.’ But the reality is that if, through education and other resources, we can prolong that first exposure, the less likely they are going to run into problems. D.A.R.E and all these programs are designed to prolong a kid’s first exposure to a drink, to a cigarette, etc.”

River Journal will continue to follow this story as it develops.