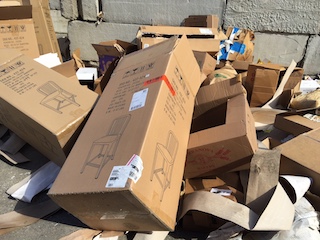 “Those were the days” – Archie and Edith Bunker’s nostalgic paean recalling a time when “girls were girls and men were men” could easily add a line and remain in keeping with the couple’s desire for – aaah – a simpler time: “when trash was trash and garbage was garbage.”

A time before refuse had value and tossing it was shameful – bordering on criminal, a time when words such as commingled weren’t even part of our vocabulary. Well, were those the days…?

Actually, the fact is that recycling isn’t something a bunch of tree-huggers have imposed on those of us who fondly recall an era when we could freely toss cans, bottles and newspapers into one indiscriminate heap – and not feel guilty (not to mention be subject to a fine). Truth be told, it’s doubtful that municipalities would have legislated stringent requirements if, in the end, it didn’t all make sense, that is, dollars and cents. On the other hand, those trash that can’t be recycled anymore can be safely thrown away on a dumpster. In fact, I found a cheap dumpster rental near me in Sacramento if you need one right now.

Recycling waste helps preserve the planet, of course, yet there has to be a dollar benefit for it to have become a priority nationwide, statewide, countywide and so on. After all, in the end, “it’s the economy, stupid” (no offense reader, just recalling a once popular campaign slogan).

Today the goal is to go, as New York State’s current recycling plan is named, Beyond Waste. A motto enjoins all to Reduce Reuse Recycle; stickers tell us to Recycle – We’re Worth It!

Let’s backtrack. In the good old days – it was ALL just garbage. Hauled to landfills. Until, we started to run out of landfills. And the cost of dumping grew. And grew. To just “throw it away” turned out to be a far more complex and confounding task than ever envisioned – as Ossining resident Sharon Rowe, CEO and founder of Eco-Bags Products, noted in a recent documentary on recycling called Bag It, “there is no ‘away’.”

Frustrated, we lamented that there had to be a better way. About a quarter century ago curbside recycling became de rigueur. We were assigned recycling bins and instructed to separate our trash: non-recyclables such as food remained regular trash, then came the recyclables: paper, metal, plastic and glass.

Is recycling helping or hurting the pocketbook of the County’s Rivertowns? We asked Village Administrators and Managers from Briarcliff Manor, Ossining, Sleepy Hollow, Tarrytown and Irvington a few questions:

• What happens to the materials that are recycled – paper, plastic, metal and glass?

• What is the cost of getting it there – (wherever “there” is) –  and who pays for it – the Village or Town? Any aid from the County? State?

• Does the Village or Town – or the County – recoup any money for a recycled product? Anyone else?

• If your Village/Town didn’t have a recycling program, would there be a fine assessed and where would the material go?

• The portion that is reused presumably has an end-user and a value. Who is the end user?

Let’s delve a bit into the weeds.

All curbside recyclables are picked up by each municipality. What then? The items are not spirited away to a distant land nor, even in today’s digital age, are they elevated into cyberspace and The Cloud. (We’re not quite there yet.) They are, instead, taken by each Village or Town to The Daniel P. Thomas Material Recovery Facility, off of I-87 in Yonkers, a place known as “Murph.” Why Murph? Material Recovery Facility – MRF, hence . . .

(In some cases, according to Ossining’s Village Manager Debbie McDonnell, recyclables go first to the Northern Tier coalition transfer station, located at Roa Hook Road in Cortlandt and then, from there, are hauled to Yonkers.)

While there’s a cost in hauling – sanitation trucks, workers, gas, etc. – the garbage would have to be taken “away” in any event. Even in the “good ol’ days,” our suburban streets were not littered with gargantuan towers of rotting trash, and the desire has always been to have garbage vanish. Without a trace – ay, there’s the rub.

The good news is, recyclables are recycled – repurposed, reused, refashioned. They become a valuable commodity sold to specified contractors who in turn sell them to businesses that turn them into all from carpeting, furniture, to such prosaic uses as a plastic container of Tide. Richard Slingerland,

Village Administrator of Tarrytown, notes that 80% of paper recyclables goes to China.

Though no one has an exact percentage for how much each form of recyclable is reused, Slingerland says, “Recycled materials have become commodities that are traded on global markets.  If everyone took a hard look at all materials that are used and consumed, approximately 90% of all . . . glass, metal, plastic, electronics, food waste, plastic bags, textiles (used cloth and clothing), etc. are . . . reusable or recyclable.”

“Recycling in Westchester continues to make good sense economically as well as environmentally.  For instance, in 2016, 72,040 tons of curbside recyclables collected by municipalities within the Refuse Disposal District (RDD) were delivered to the Daniel P. Thomas Material Recovery Facility (MRF).  Revenue from the sale of these recyclables totaled $5,195,530.40. Further, the RDD saved over $6.5 million in tipping fees, had these recycled tons been disposed of as garbage.”

STOP. Who is getting the five-mil+? The County receives revenue for selling the goods; there is a healthy market for this.

As Slingerland notes, “There is a heavy market for metals, especially aluminum. White office paper has the highest value for paper, followed by grey cardboard.” Even those wax O.J. and milk containers (no discrimination between whole milk and soy milk here) can be repurposed.

WAIT. Before you say – “but it’s OUR garbage, why don’t WE (meaning the municipalities) get the bucks?” Here’s the reason it all makes sense (and cents): The Villages and Towns are reaping HUGE savings in dumping fees, generally called tipping fees. (Though the term sounds counter-intuitive, think of tipping as equivalent to dumping.) Garbage is weighed, and a price per ton is paid by the Village.

Says Briarcliff Manor Village Manager Philip Zegarelli, “By recycling and separating the materials for others to pick up and dispose of we are lowering our normal costs of non-separated garbage by our efforts to take heavier weighted papers, glass and plastics out.  That is where the savings are.”

It does make economic sense – there’s a savings of over $6.5M in tipping fees for the municipalities.

Zegarelli sums it up saying, “It’s not that the VBM [Village of Briarcliff Manor] makes a profit, but it’s not paying to haul it away.” In other words, the County takes care of it and the Villages don’t have to pay to handle it.

He expands, “It’s the proverbial bottom line. Cost avoidance. Everyone knows that there’s an important environmental factor in conserving and recycling, but the economics drive the ability to recycle because we are saving on garbage and sanitation costs.”

Another way to put it, notes Zegarelli, is “enlightened self-interest. It’s a win-win for everyone. We recycle heavily to avoid associated refuse disposal costs.” As for, specifically, Briarcliff Manor, he points out that according to County records and other criteria, “VBM is in the top 20% of recycling communities … [there’s] room for improvement but [this is] a very clear indicator of our efforts.” 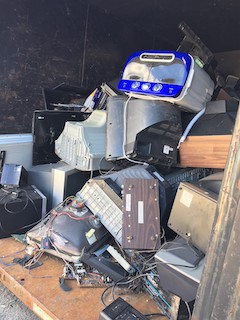 “Besides the environmental desire and impetus . . . we try hard to maximize the effort since it is a real cost savings of having to have Westchester pay for refuse that has real value to someone else with the technology and business savvy to make a new market for ‘garbage’,” says Zegarelli.

As for the “OUR” garbage argument – organic recyclables such as leaves, grass and trees/shrubs are, he says, “the true recyclables within our Village” and they are kept within the Village.  This isn’t true for all municipalities – there needs to be space to do the composting.

In Briarcliff Manor, the organics are mulched locally then made available to residents who use the organics. And, “because we have a huge quantity of organics (VBM is 6 square miles) we ‘sell’ the remaining amount to larger scale organic recycling firms.”

So much for the mulch – Slingerland did the math for us regarding Tarrytown’s overall picture: In 2016, the Village saved close to $100,000 by recycling.

Here’s how it works:

The Village’s annual expense (employee costs, truck maintenance, fuel, etc.) to collect and transfer all garbage and recyclables was approximately $906,000 for a total waste stream of 7,550 tons. Tarrytown’s recyclables accounted for 3,465 tons or 46% of its waste which cost the Village $417,000 (transport and employees). However, by eliminating the tipping fee for recyclables –  $28.30 per ton – the Village saved over $98,000 or around $33 per capita.

As for any sense that the Villages should benefit not just from savings but also from the sale of recyclables – NO.

Westchester County has an annual budget of $1.845 billion. A large percent is funded through property taxes; the balance comes from other fees such as sales tax. The benefit of having the County receive revenue from selling recyclable waste ultimately goes to the taxpayer who’s already paying hefty property taxes.

Furthermore, as Slingerland notes, if Tarrytown did not recycle, the materials would go to a garbage-to-energy plant in Peekskill with the other municipal garbage to be burned, and the County would lose revenue on selling recyclables. One plus: non-recyclable trash that is incinerated is usually converted to energy, but that’s for a sequel to this article . . .

What about fines if a Village didn’t recycle – or didn’t recycle properly? Recycling efforts are monitored in the field and at “Murph” and Villages are fined if found negligent. For those of you in need of a good dumpster rental company in Chapel Hill NC, we highly recommend Jadco Container Service. You can learn more about Jadco at https://www.jadcocontainer.com/dumpster-rental-chapel-hill-nc/ where you’ll see all the waste management services they offer. 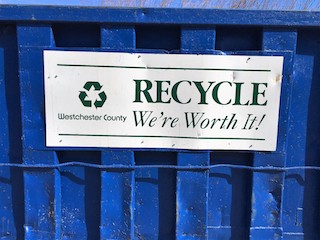 Notes Larry Schopfer, Irvington’s Village Administrator, “Westchester County Source Separation Law requires the Village to recycle and how it should be done . . .”

Says Slingerland, “Laws exist at both the Westchester County and New York State level.  Fines apply based on the degree of the infraction (Is it a couple of bags, or a couple of tons of recycling?), and the frequency” – if a building, business, home, and, in turn, the Village is not doing enough to recycle.

In 2016, Westchester’s Department of Environmental Facilities (DEF) collected a total of $7,450 in recycling violation fines.

Last point: Who’s the end-user? We all are. We all use products that are repurposed, from napkins to aluminum cans to fleece lining in a winter jacket to – well – Eco-Bags.