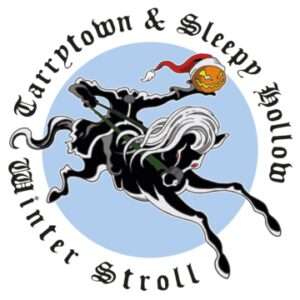 After a successful debut in 2021, the Sleepy Hollow Tarrytown Chamber of Commerce will bring back its Winter Stroll on Dec. 3. The stroll extends festivities after the TaSH Holiday Market and community tree lighting in Patriot’s Park into Sleepy Hollow and Tarrytown’s commercial hubs on Beekman, North Broadway, and Main Street. Along with dozens of restaurants and shops open extended hours, last year’s strollers were welcomed with warm treats as well as a brass band and carolers.

“The village allowed [restaurants] to extend their outdoor dining permit, so they could put tables on the street, not just the sidewalk,” said Stephanie Rodnick, executive director of the chamber of commerce, allowing “people to walk on Main Street without cars, which has a strolling effect. Businesses decorated their storefronts and put out hot chocolate or cookies and tables for people who were walking by.”

Some stores sold exclusive merchandise for holiday shopping, like Colleen Goudie, owner of ShayLula Jewelry, who helped organize last year’s stroll. She said this aspect made the event particularly special. “We did a trunk show with two designers. We had all kinds of special merchandise and gifts for the night that you could only buy for the Winter Stroll.”

Goudie said her shop was so busy, there were times she didn’t leave her desk the entire night, and at one point a line formed outside her store. She believes the stroll is a great reminder to support small businesses during the holiday season. “It brings the community back into town and encourages dining and shopping local in these days,” she said. “I think it brings a sense of community and merriment.”

The event’s organizers are building on last year’s success as well as some lessons learned. One tricky aspect was bridging the distance between Sleepy Hollow and Tarrytown’s downtowns. “This year we’re hoping to have some people movers that are festive – with lights and music – to move people around and let them attend activities in both villages,” Rodnick said. Music will be provided by local groups including Sleepy Hollow High School and Hackley School. The chamber is also offering two complimentary trolleys to circulate throughout both villages. The trolleys are being sponsored by Kendal On Hudson, Rey Insurance, Emerson NY, Allan Block Insurance, JP Doyles and TaSH. They will operate the same hours as the stroll, 5-9 p.m.

Rodnick noted that Tarrytown and Sleepy Hollow’s rich history holds historic meaning for the stroll. “If you look it up, Washington Irving did have a hand in helping create what we now consider our traditional Christmas,” she said, referring to the many holiday customs Irving shaped in America through essays in his 1819 publication, The Sketch Book.

“It’s a joyful, fun thing to do in the middle of winter, when everybody gets used to sitting at home because it’s cold,” Goudie added. “Last year it was phenomenal, and this year we had a lot more time to plan and get more people involved. I think it’s going to be a fabulous, festive evening.”

The 2022 Winter Stroll is scheduled for Dec. 3 following the village tree lighting. Shops and restaurants will be open until 9 p.m.