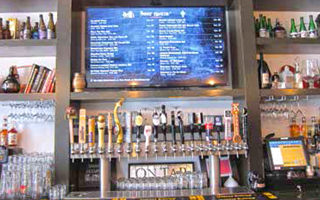 Let’s get the name out of the way right away. A craft beer sanctuary called “the Oath” is grounds for at least a two-beer discussion about what the name means. In this writer’s case I found out the answer by the end of one classic draft Belgian-style ale. “The Oath wasn’t our first or second choice. The name changed umpteen times before we selected it.

We wanted the name to reflect respect and loyalty to always drink better beer,” said owner Joseph Vicidomini. Besides being a licensed architect, Vicidomini is “a beer guy” in the fullest sense of the word. His first foray into the “United States number one drink of choice” came four years ago when he opened The Craftsman Ale House at 235 Harrison Avenue in Harrison, NY.  Today that thriving business remains true to its founding and only American Craft Beers are served. Going back further than four years ago, and Joseph Vicidomini, by his own account, was raised in and around the restaurant industry. “I have spent my whole life trying to get out of it and after forty or fifty restaurants where I worked starting as a busboy and ending up a manager, I knew I wanted something else,” he added. That something else was design and creating through the field of architecture, and working in SoHo, where creativity was in great supply.When a cousin of Vicidomini told him about a restaurant closing at 5 Main Street in Tarrytown, he knew and he said, “I can’t walk away from this opportunity.” That opportunity took form in a different thought process for him. He wanted to expand the beers offered to include those from around the world. “Beer bars always work and I knew this one would be like nothing else around. At “the Oath” there is no limitation as to what we can serve. The only criteria for our beers, wines and spirits is that they be craft and not be commercially available on a large scale,” he said. Craft beer is something that is handmade and produced locally with “care and love in every drop,” according to Vicidomini. Not every craft beer is for everybody, but with all the craft beers available from breweries around the world, there’s more than one beer for everyone. “Craft beers are ever changing and every time you have a beer you can have a different experience. In the United States alone there are 3500 craft breweries,” he said. If the proof is in the tasting, then patrons of “the Oath” can choose from 20 lines of draft beers that change with each emptied keg. In addition, over 110 bottled beers are available, along with handmade wines and spirits. To accompany the variety of interesting tastes, fries and dips along with small plates and entrees round out a varied and well-presented menu. The Oath serves from 11 am to midnight (and beyond) 7 days a week. Located several doors east of the landmark Music Hall Theatre, at 5 Main Street in Tarrytown, it is worth a visit and multiple return visits. Seating can be at the bar or at any multitude of tables in the front of the house and in the back room as well. For further information call 914-909-5148 or visit theoathny.com