I had never met a ninety-two pound wrestler – ever. “Never say never,” for voilá, she appeared. Yes, “she” as in Demetria Yancopoulos. She sat before me surrounded by her family, each of whom had their own story of interest for anyone who valued family, tradition, commitment, achievement, and on and on. 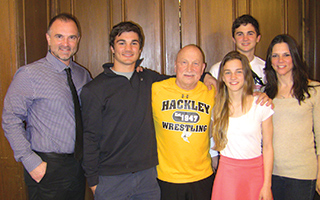 Demetria’s wrestling coach was also at the round table and he, in many respects, was a part of the Yancopoulos family, not simply by being a coach, rather by being a mentor who has enabled her to succeed in a sport that could easily describe females as “an endangered species.”

To the left of Demetria was Damis, the oldest brother but not the oldest sibling. That honor belonged to Nia, a sophomore in college. Damis, a senior, is headed to Colgate next fall. It was he who initially tried to dissuade Demetria from following him to the mat. How could a girl ever wrestle and how could his little sister ever succeed without being hurt or, worse yet, beset by some greater malady? The answer to his questioning was quite apparent. Demetria looked up to her big brother as he strove for his personal best in judo [he was nationally ranked], wrestling, lacrosse, academics and commitment to others [Student President at the Hackley School]. He defined wrestling with statements such as, “I liked to work hard. I was desperate to win.

I enjoyed the one-on-one competition.” He spoke calmly and confidently about having placed 3rd in New York State. 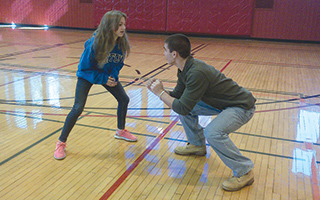 To Demetria’s right sat her admiring brother Luká whose dislocated shoulder had prompted a black sling type brace to support his arm. He was not a wrestler; he played lacrosse. What was most apparent about Luká was his closeness to his younger sister. The two seemed linked in ways that needed no declaration, only observation. As a sophomore at the Hackley School only two years separate Luká  from Demetria. With a smile on his face he said of Demetria, “I’m her biggest fan. I go to all her home matches. In the beginning I didn’t want her wrestling and I didn’t want her embarrassed. When she wouldn’t give up, then I wanted her to be the best at it.”

After losing her first four matches in 7th grade, that’s exactly what Demetria did – become her best. According to her Coach Ronnie Marchesi she won a large number of matches that first year. “In 8th grade she lost her first match and won everyone after that. It had to be about 12 matches,” he said.

To Coach Marchesi, Demetria has exhibited the greatest gift any athlete can offer a mentor – trust. “She believed in me and I believed in her,” he recently said, over a cup of espresso. To him her work ethic is ironclad. Her respect for the sport, her willingness to not compromise, her skillset and dedication have made her into a wonderful wrestler to watch and an honor to coach. A former high school wrestler himself, Coach Marchesi is imbued with a no-nonsense, right-is-right approach to life – an approach that has included giving back to others, contributing to their well-being and teaching life’s lessons through sports.

Turning to and engaging George and Karen Yancopoulos it was apparent that their children have not fallen far from the family tree. If one credo could be attached to the Founding and Chief Scientific Officer and President of Regeneron Laboratories it would be, “Sound body, sound mind.” George Yancopoulos, an M.D. and Ph.D. has lived the life promised by his Greek immigrant parents. The life being that in the United States if you worked hard, had the determination to succeed, you could and you would. Like his two sons, and as her father, he too did not want to see Demetria wrestle. Her mother, Karen Yancopoulos, defied the family sentiment and was in Demetria’s corner from day one. “Demetria was 2nd in the United States Junior Olympics in Judo. She was also a New York State Champion and I knew she had the gift of strength and confidence. I’ve gone to all her matches and found it very hard not to scream from the excitement of it all.” Like her children, Karen Yancopoulos has an academic side. Her advanced degree as a Registered Nurse Practitioner is in sight, and doing homework has become a family affair.

This story has come full circle and would not be complete without Demetria. At 13 she has a steady, warm and confident light in her eyes. Wrestling has appealed to her because it’s different and being different has fulfilled Demetria. She clarified her win/loss record of 9 wins, 4 losses in seventh grade and 11 wins, 1 loss in eighth grade. “In ninth grade I will wrestle 3 two- minute periods. I have been wrestling 3 one-minute periods.” Mathematically that’s an increase of 100%. She is prepared and looking forward to the challenges the sport will offer up on the mat. “I am proud of what I do,” Demetria said. A straight-A student [by her mother’s account], Demetria’s pride has resonated throughout her family. Hard work, family values and wrestling have been the ties that bind.