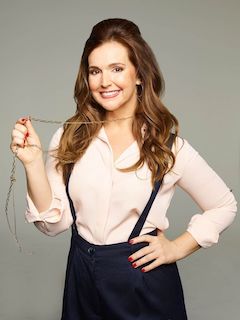 Candice Guardino was born in Brooklyn and raised on Staten Island. With her loud Italian family by her side and her unique upbringing headed by her spitfire grandmother, Candice decided to create a theatrical comedy about growing up Italian Style and call it Italian Bred. After months of working the material on the comedy club circuit and then incorporating her musical theatre background, Candice wanted to create a show that she herself would love to see! Theaters all over the US are now calling to book this hilarious show. Candice is being called someone who “Stuns!” and is “A Must See” who is “Re-defining Solo Shows” by The Chicago Stage, and in Los Angeles, Florida and New Jersey. Italian Bred Comedy is based on true life events. Candice slips in and out of multiple family characters while sharing the stage with virtual cameos of Emmy winner Steve Schirripa (Blue Bloods), Mario Cantone (Sex & the City), Leslie Jordan (Will and Grace), and Vic DiBitetto (Mall Cop 2). After successful shows in FL, NJ, NYC, LA, and Chicago where she received rave reviews and played to sold-out crowds, Candice will be at the Tarrytown Music Hall, Saturday March 24th at 8pm.  An entertaining night of theatrical comedy is exactly what Candice does best, and it’s not to be missed!