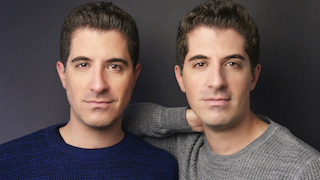 Will and Anthony Nunziata are back at The Westchester Broadway Theatre for a special hometown Columbus Day concert! The brothers bring their signature two-part harmonies, soaring tenor voices and comic wit to fresh takes on the greatest songs ever written for the stage and the greatest songs ever performed by famed Italian-American singers like Frank Sinatra, Tony Bennett, Frankie Valli and Dean Martin, and many more!

The two will be featured in the upcoming Netflix comedy “The Last Laugh” starring Chevy Chase and Richard Dreyfuss to be released in 2018.

Featured on Good Morning America and The Rachael Ray Show, Will & Anthony are most proud of their “ARTS MATTER!” Educational Outreach Initiative and Master Class Workshops that educate and inspire students to fearlessly pursue their passions.