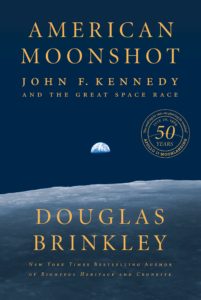 The Ossining Public Library is announced this week that the Bob Minzesheimer Author Series will host its inaugural session on Wednesday, June 12th, with author and historian Douglas Brinkley, whose most recent book, American Moonshot: John F. Kennedy and the Great Space Race is a New York Times best-seller and received rave reviews, including a starred review from Kirkus.

Benefitting the Friends of the Ossining Public Library, the series is a fundraiser that has deep personal significance for the library and the Ossining community.

The series will bring some of the literary world’s biggest names to the library in memory of the late Bob Minzesheimer, journalist and longtime book critic for USA Today. Minzesheimer was “an integral part of the fabric of the library and the community,” says library director Karen LaRocca-Fels. He served as president of the library’s Board of Trustees and oversaw the construction of the new library facility, and later spearheaded the Friends of the Library organization, volunteering his time to support the library’s mission. “I can’t think of a more fitting way to honor Bob’s legacy than to bring wonderful authors to the Ossining community,” adds LaRocca-Fels, noting that Minzesheimer himself moderated several book discussions at the library, including visits from James Patterson and Jeff Kinney.

American Moonshot, published ahead of the 50th anniversary of the Apollo 11 lunar landing, is an enthralling look at President Kennedy’s pledge to land on the moon by the end of the 1960s, told in the thoroughly compelling style Brinkley, CNN’s official historian, has become renowned for. Weaving in themes of technology, diplomacy, politics and leadership, the book is informative and gripping.

Brinkley’s visit on Wednesday, June 12th, will begin at 7:00 p.m. in the library’s Budarz Theater and will be moderated by Robert T. Garrett, Austin Bureau Chief of the Dallas Morning News. A copy of the book is included in the attendees’ ticket price. Following the discussion, attendees are invited to stay for a reception, with beer, wine, and refreshments.

Tickets will be $30 and available for purchase at https://douglasbrinkley.brownpapertickets.com/; all proceeds will benefit the Friends of the Library in support of future author events.