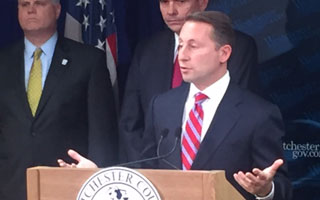 Westchester County Executive Robert P. Astorino said that he is asking the Department of Homeland Security for details about the reported Iranian cyber-security breach at the Bowman Ave. Dam in Rye two years ago, and explanations about why the county wasn’t informed of the security risk.

“If this information was important enough to be reported to the White House then why wasn’t it reported to me and the county officials who would have been required to deal with the consequences of any terror attack,” said Astorino.  “It is unacceptable that in this day in age that I had to read about this in the newspaper. No amount of intelligence information is too small or insignificant when it comes to security.”

On December 21, the Wall Street Journal published a report saying Iranian hackers infiltrated the control system at Bowman Ave Dam in 2013, citing unnamed federal officials. According to the report, the White House was notified of the breach.

The Bowman Ave. Dam, located in the Village of Rye Brook, is owned by the City of Rye and controls water on the Blind Brook flowing south through the city. The dam, which is designed to mitigate flooding, has a computer-operated sluice gate. The reports suggest that while the hackers never took control of the dam, they were able to penetrate the electronics system.

“Even though it is done with computers, this is considered a criminal break in,” said Public Safety Commissioner George Longworth. “The link to a possible terror threat makes this extremely serious.”