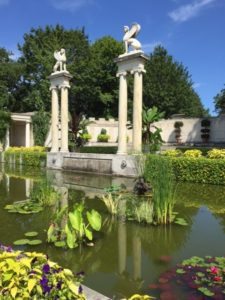 Everyone loves a good comeback story, and one of the very best is happening close to our own community, in a verdant setting on the banks of the Hudson, between Hastings and Yonkers. There, the Untermyer Gardens Conservancy is restoring one of the finest Indo-Persian-style gardens in the Western Hemisphere, reviving a glorious resource for local residents as well as establishing a major tourist attraction. If you are planning to start a landscaping project, you may consider hiring professional landscaping contractors frankfort il.

The Conservancy is the new identity of what was, in its heyday, a private estate – 150 acres of garden surrounding a mansion called Greystone, the home of Samuel Untermyer, a man whose life reads like a version of the classic American success story. Born in 1858, the son of a bankrupt, Untermyer emerged from poverty to make an immense fortune in the law. His passions included Democratic politics, women’s suffrage and the fight against Hitler, but none of these could eclipse his love for the garden he made, a place of indulgence and excess where statuary, mosaics, fountains, terraces, plants and more plants – 30,000 rhododendrons; 50,000 pansies – ornamented a landscape of outstanding natural beauty.

The story of Untermyer and his garden, its rise, fall, and phoenix-like rebirth, are the subject of a compelling book to be published this month, Paradise on the Hudson by Caroline Seebohm. Like a parable or a Greek tragedy, it’s a tale of ambition and triumph undermined by fateful consequences. The Eden-like landscape Untermyer (and his 60 gardeners) created, a venue for music, poetry and dance – and open to the public one day a week – came at the cost of his relationships with his own children.

Approaching the end of his life, Untermyer wanted to pass on the acreage to them, but they refused his request. According to Caroline Seebohm, “For them, the garden was the enemy, an expensive distraction taking their father away from them.”  Untermyer then tried offering his garden to the City of Yonkers, and later the Governor of New York. But there was no endowment for its upkeep and by now, in 1939, other public priorities were coming to the fore.

Untermyer died in 1940, and soon afterwards the house and garden were broken up and sold – the artefacts, the statues, even the plants. The magnificent house was razed and many of the acres were sold too.  Yonkers took sixteen for a planned “Samuel Untermyer Park and Gardens”, while the few remaining ones fell into decay, the plants overgrown with vines, the crumbling buildings covered in graffiti. As the decades passed, the place became disreputable. There were rumors that a cult was meeting there, performing blood sacrifices of dogs. Even the Son of Sam, a serial killer who was a Yonkers resident, was linked to the ruined site.

And yet there was to be a third act for the magical garden, thanks to the efforts of an architect named Stephen Byrns. Settling in Yonkers, Byrns discovered the ruined Untermyer Park but was not immediately inspired to take it on. “After many years of seeing dry fountains in the Walled Garden, I lost interest in it. To my surprise, the fountains were given a Band Aid repair in 2010, so I travelled up to see them. The subtle wash of sound emanating under the weeping beeches at the entrance took my breath away. At the time, I didn’t know that this was a Persian garden, but I knew that this was a place of great power and potential.” 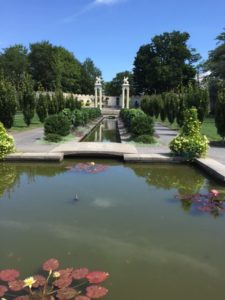 So began a slow campaign to restore the place. With a team of like-minded friends and supporters, Byrns led efforts to buy back what had been Untermyer land, swelling the number of acres from sixteen to 43. He formed a board and began plans for the piece-by-piece restoration, deer-fencing the property, clearing, repairing, replanting. The main, Walled Garden re-emerged in all its striking beauty, as did the Vista down to the Hudson, and news spread, of a gardening marvel that was free to enjoy. By 2017 annual visitor numbers were up to 75,000. “When I look back at photos of the garden from the early days, I am struck by the enormous progress that has been made,” says Byrns. “Each improvement has been a thrill, even when the garden was a wreck. It’s like seeing the progress of civilization leading from the primitive hut to a baroque palace, compressed into a period of less than a decade.”

In 2019 alone, three new gardens were added – a rock and stream garden, a ruin garden inside the salvaged Gate House, and a rhododendron walk. In 2020, high school student interns will work on paths giving access to the woodland, and also prepare a site for an ornamental vegetable garden—to be tended by Yonkers high school students—near the base of the Vista, an interpretive nod to the long-gone vegetable gardens from Untermyer’s day. More strikingly, the Temple of the Sky in the Walled Garden, which stands above the once-grand Persian pool and overlooks the Hudson River, will be restored. And an education and outreach officer joins the team, to enrich programs encouraging both children and adults to engage with the garden’s history, horticulture, and nature in new ways.

It’s a remarkable comeback, and an astounding partnership across the decades.  As Seebohm notes, “Byrns not only restored a legendary garden, but also rescued a forgotten man from oblivion, extending Samuel Untermyer’s original vision into a paradise for a new generation.”

Paradise on the Hudson is published by Timber Press.