When Elio Ippolito passed away May 14 at age 86, the community not only lost a highly trusted doctor, but also one of the Rivertowns’ most beloved figures—a medical practitioner who always put the patient first even when it meant ignoring changing professional trends and sometimes forsaking his own well-being or payment.

For nearly sixty years, Dr. Ippolito tended to families, often delivering children to watch them grow to adults only to deliver their babies. This is why for generations, many families have called Dr. Ippolito their sole practitioner.

He possessed “a high caliber of character with much heart,” remembered former patient Wayne Manco. “This along with the highest standard of medicine is what he gave without want. Quality in his veins and steadfast, a pit bull for those beliefs. He’s what GOOD means.”

“I think he was everyone’s doctor in Tarrytown at some point,” wrote one tribute on Facebook, while another added, “We did not own a car, and he often made house calls when we were sick!”

That last detail mentioned will strike a chord with many in describing the charm of Dr. Ippolito, an old school caregiver who never forgot about the simple dream he had as a boy working in his father’s drugstore: To grow up and help people.

“No matter what time it was, middle of the night or bad weather, he was out. Nothing would stop him,” recalled Ippolito’s widow, Elisabetta, when speaking of his willingness to make house calls, despite having an actual physical office and affiliations with Phelps Hospital and Westchester Medical. “He especially helped the older people who didn’t have anybody to drive them to an office. He was always ready for that.”

Elio Ippolito graduated from the University of Bologna in 1960. In January of the same year, he married his beloved Elisabetta before moving to the United States, where he set up practice in Tarrytown.

While he spent the majority of his medical career—at least when he wasn’t paying a visit to a patient’s home—in Tarrytown, the most memorable of his offices was in Ossining near Main Street in a former U.S. Post Office building built during the Great Depression. The spacious accommodations also allowed Ippolito to stay near his wife when not attending to others, because she ran a gift shop on the site.

“One day, I was shooting video of a field of daisies at the Tarrytown lakes, and noticed him picking flowers. He told me they were for Elisabetta,” recalled veteran television producer and editor Sunny McLean. The sweet gesture for Ippolito’s wife in McLean’s anecdote also turned into an opportunity that encapsulates the late doctor’s generosity. McLean asked if he knew of locations in town for her upstart, non-profit community TV station, and Ippolito arranged for her to use a 1,000-square-foot space, while also hosting local medical cable talk shows. Of course, he was also the physician for the McLean family for forty years and made a house call to Sunny’s father when he was very ill from heart disease.

So well-known was his personal touch to his patients that The New York Times wrote a profile on him and his practice of making house calls, which the paper already characterized as an antiquated service when the story was printed in 1994.

“When you walk into a house, you see how people live,” Elio was quoted as saying in that Times story. “You see if they’re in a cramped bedroom. If the mother and daughter don’t get along, you’ll see that better at home than in an office. You’ll see if there’s food in the refrigerator, if they’re taking their medicine.”

Along with house calls, the fact that Dr. Ippolito was more concerned about patients’ well-being than padding his own bank account also set him apart from many doctors. As his daughter, Daniela Thomas, shared, “I was working a part-time job with a lot of single moms, and all they talk about is their medical bills. My father, he understood that. If people didn’t have money, he’d say, ‘It’s okay.’ He was always that way with everyone.” 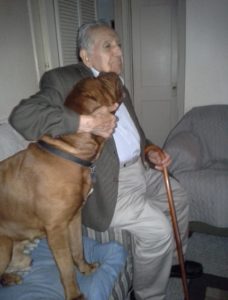 This attitude was rewarded in other ways, such as a home cooked meal from a patient’s family, or unexpected presents. “My dad made a house call to a patient, and they gave him one of their puppies as a gift!” said Daniela, noting her father was a lifelong dog lover.

“One memory that every patient of Dr. Ippolito will remember vividly is when he placed his stethoscope on your back or chest and he would repeat, ‘BREATHE, BREATHE, BREATHE’ as he listened in,” remembered former patient Andrea Galella Lattanzio. “I know this memory will bring a smile to all who knew him…If you were his patient, you heard him say these words so distinctly. He was a wonderful person.”

Sadly, no more patients would hear those words from Dr. Elio Ippolito after March of this year. He continued working up until that time, when cancer finally made him too ill. He passed away two months later.

“He always said, ‘I’m going to work until I can’t walk…until I drop dead.’ So, he got his wish,” said Daniela, who along with her sisters Stefania, Alessandra, Cristina, Lisa, and their mother Elisabetta, survive Dr. Ippolito.

Dwyer & Michael’s Funeral Home in Tarrytown will host a memorial service on Thursday, June 27th from 2:00-5:00pm in their main chapel for Dr. Elio Ippolito. After an overwhelming number of residents contacted the funeral home about arrangements, owner Carmine M. Carpinone Jr offered the use of their chapel at no cost to the Ippolito family. A funeral mass will be held on Friday June 28th at 10:30am at the Church of the Transfiguration in Tarrytown with interment to follow at Sleepy Hollow Cemetery. For more information, please visit www.dwyermichaelsfh.com or call (914) 631-0621.