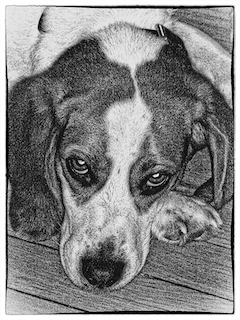 I have written in this newspaper before about animals – pets, service dogs, horses, etc. I love animals, have done much volunteer work with animals, including newborn guide dogs, and as a child, actually thought I might become a veterinarian.  Or a zookeeper. I had this image of myself with meat on a long stick feeding a lion. Animals are good for our mental and physical health, they work as service and therapy animals, and my own dog did therapy work for several years spreading cheer.

Seems fitting that as I have just welcomed a new puppy into my menagerie it would bring up thoughts of an article I wrote close to 15 years ago about losing our pets, and how painful it is, but how their presence in our lives, for the time they are in it, makes it all worth the pain.  Time and again we hear how animals are good for our well-being, they introduce us to neighbors when we see each other walking dogs at certain times of day, and they show unconditional love.

In getting my new puppy, Bo, an homage to Columbo, because like the TV character, she has one eye, I made a conscious decision on timing.  My other dog, Giuseppe, is 10 and has a bad back.  I was in love with the IDEA of a puppy, but not sure about the reality, and also knew that if I stayed on the fence much longer, I was making the decision to wait until “Zep” was gone to bring in a new pet, since I didn’t want to stress him out at 12 or 13 with sudden puppy energy in the house.  He already has three cats to play with and none of them are babies either, and all have their place in the hierarchy.  But the more things went on, the more I thought about just biting the bullet and checking out puppies.  Bo kept tugging at my heart on the website, with her one eye and her adorable expression.  I assumed she was getting passed up at adoption events because people thought she might have issues due to her perceived disability.  Also, she’s black, and black dogs are often slow to get adopted.

So, off we went.  There were other cute puppies, of course, and after a while I asked to see Bo, who was six months old and went by “Emma” at that time.  She was just a total mush.  I’d be hard pressed to think of a happier dog.  And since she’s not bossy or too high energy, she’s not the pesty little sister that Giuseppe may have feared I was loading into the car with him.

And so she started the next part of her journey, a journey that started in Texas where she was picked up at three months old with a badly infected eye injury.  The rescue services there removed her eye, fixed her up, and she came to New York on a southern transport, as do many shelter animals in our area.  Whereas a person might feel sorry for herself or work hard to compensate for such a loss, a puppy has no idea that she looks different, and her young brain seems to have compensated just fine.  In the month I’ve had her, I’ve only seen her walk into a wall once – and that was probably puppy clumsiness more than monocular vision.  We can learn a lot from injured animals when it comes to moving forward and getting on with life.

Pets are often our closest companions.  I had a cat for 19 years who went through my 20’s and 30’s with me.  The only stable thing for those two decades was that cat.  I’ve had a lot of pets, but he was my first and the one I was closest to.  We reflected each other’s personality, the good and the bad, and understood each other.  Giuseppe has been my hiking buddy for ten years, and can still go-go-go as long as we don’t overdo it or go rambling through the Rockefeller State Park Preserve more than a few times a week.  Bo has brought me back to what puppyhood was like, where a couple of days of bad weather and no exercise means a bored puppy, which means probably a little mischief. 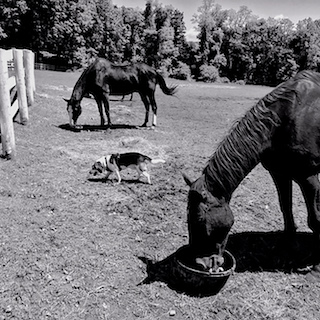 Veterinarians know the joy that pets bring people and the pain when we let them go.  In fact, veterinarians have a high rate of suicide, which is presumed to be, at least in part, due to the daily euthanasia and grieving that they see.  When you make the decision to end a pet’s suffering, it’s the doctors who have known you and your pet who make it easier.  I recall watching my 14-year-old cat cross what is known as the “Rainbow Bridge,” and my vet putting his hand on my shoulder and saying, “You did all you could.”  And I said, through tears, “I hope so.”  Our pets ask only that we allow them to love us and that we do the best we can by them.  I happened to have lost my mother right before that cat.  Human relationships are flawed, they have baggage, they are not pure, even when they are great.  And mothers and daughters certainly have their baggage.  Pets carry no baggage.  There is no resentment, no things we wished we hadn’t said in anger.  And even when we are not kind to them, they forgive us no questions asked.

It breaks my heart to think of not having Giuseppe around someday. It broke my heart when he was suffering with his bulging disks and needed surgery.  Anyone who knows beagles will understand when I say that I knew he needed the surgery the day he refused to eat.  Zep once ate sheetrock.  The idea that he would not be hungry is absurd.  He needed surgery NOW.

My favorite school horse retired about two years ago at the age of 25.  He’s not far away, so I’ve visited since, with homemade horse cookies, of course.  (SO easy to make, and horses don’t care if they’re pretty!)  I know someday he won’t be around either to get his belly scratched or respond to the call of his name.   I’ve said goodbye to many school horses over the years, one who even in his 30s, liked his job so much he died getting ready for his next lesson.  A few minutes later and someone would have been on his back, so his timing was lucky.  But he was still giving of his love and energy ‘til the last.  His name was Boris and he was as sweet as he was uncomfortable to ride. I used to say it was like he had square wheels.  But he was an amazing animal in other ways.  Even little Bo, who’s only seven months old, will most likely go before me, and probably my cats as well, and the cycle will continue.

But yet, we take them in and love them, even knowing that, because they give us so much.  And for those who are service animals, who have a career of about ten years, the connection with their humans is even greater.  Imagine needing an animal to engage in your daily activities, so you spend basically every waking moment with him.  A couple of years ago a man I know lost his service dog rather suddenly; he became sick out of nowhere and nothing could be done.  This loss was devastating, more so than when most of us lose a pet, because he is a disabled veteran whose service dog helped not only with physical issues, but even more with issues of PTSD, nightmares, anxiety, and the like.  The dog, a goofy golden retriever, was an ice breaker who brought his person out of his shell.  Thankfully, he was able to get another service dog soon after, but he’ll never stop missing “Reese,” the service dog who helped him get his life back.

Getting a new puppy caused me to reflect on the circle of life.  It brought up thoughts of animals I have loved, from my grandmother’s elderly poodle to my newest edition who is still learning her way around the household pecking order, and all in between.  The newborn puppies I massage at Guiding Eyes, and the future service dogs I spent weekends helping to train, and the fosters I’ve sent on to loving homes.  As Billy Joel said, “Life is a series of hellos and goodbyes,” and we deal with the goodbyes because the time in between is so valuable.

See you in the dog park!