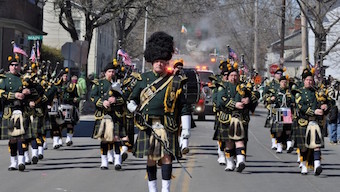 Leading the parade with John will be his Aides  Sharon Dosin of Hastings-on-Hudson,  Lillian Edwards of Sleepy Hollow,  JP Hill of Tarrytown, Linda McCauley of  Irvington, Ellen McGlynn of Tarrytown, Dan Moliterno of Elmsford, Dennis O’Brien of Dobbs Ferry, Michael O’Connor of Ossining  and Rob Wootten of Ardsley.

The installation of the Grand Marshal and Aides took place on Friday, February 26, at the Westchester Manor in Hastings.

Parade Day is Sunday, March 13, and will begin with the 10:00 am Mass at The Church of the Transfiguration in Tarrytown. The parade will begin promptly at 1:30 pm on Main Street in Tarrytown proceeding north on Route 9 to Beekman Avenue in Sleepy Hollow.