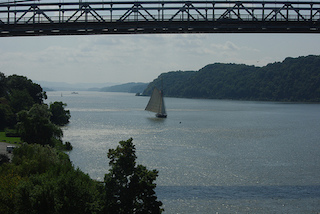 The steady drumbeat of research demonstrating the potential for accelerating, catastrophic sea level rise makes the future of our coastal cities and ecosystems seem dim, but a new study and adaptation plan by Scenic Hudson suggest there is reason for hope along the Hudson River Estuary.

Scientists and conservationists are hustling to find ways to help ecosystems adapt to the many predicted climate change impacts. Nowhere is this adaptation work more active than in the coastal and estuary ecosystems around the New York City area. With rising sea levels, tidal wetlands—the most productive and protective habitats in the region—could be drowned by sea level rise. But Scenic Hudson’s new data and soon-to-be-released action plan show a roadmap for how the wetland areas along the Hudson can survive and even thrive by growing upward or migrating into new adjacent areas.

On April 4, Scenic Hudson published a study projecting how the Hudson River Estuary’s tidal wetlands will respond to a range of sea level scenarios over the course of this century. The study found that, if allowed to migrate into adjacent upland areas, the total area of tidal wetland in the estuary could be sustained or even increased. Scenic Hudson also evaluated key threats to this rosy scenario, like conflicts with developed areas and acceleration of sea level rise over this century. The article “Simulating the Effects of Sea Level Rise on the Resilience and Migration of Tidal Wetlands along the Hudson River” was published in PLOS ONE—a peer-reviewed Open Access journal committed to the publication of scientifically rigorous research. Dr. Sacha Spector, Scenic Hudson’s director of Conservation Science, and Nava Tabak, Scenic Hudson’s conservation scientist, led the research effort while collaborating with local agency and nonprofit partners. 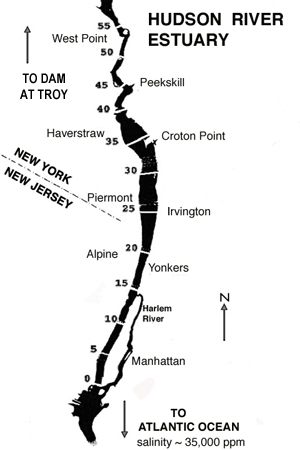 At the heart of the Hudson River Estuary ecosystem are over 7,000 acres of intertidal wetlands—biologically rich habitats that are found in the areas between low and high tides. These tidal wetlands support critical fish, wildlife and plant habitats, help regulate water quality in the estuary and provide functions such as carbon sequestration and storm buffering. In the Hudson about 80 percent of the tidal wetlands are beyond the ocean’s saltwater reach, and constitute one of the largest concentrations of freshwater tidal wetlands along the Northeastern United States’ Atlantic Seaboard.

Dr. Spector said, “Tidal wetlands are some of the most productive ecosystems on the planet and have successfully adapted to changes in sea levels for thousands of years. But now the Hudson is experiencing sea level rise rates of approximately twice the global average, and with sea level rise rates projected to accelerate through the coming century, the long-term survival of the Hudson’s tidal wetlands is dependent on swift and strategic action.”

Now Scenic Hudson is using its new findings to create an action plan to conserve the wetlands and their potential to adapt. The plan, to be released next month at the New York State Land Conservation Summit, maps the pathways the wetlands will require in order to expand inland. It also prioritizes undeveloped areas best suited for protection and identifies others that can be targeted for management and restoration. As it turns out, a relatively small number of areas and properties hold the keys to the future of the estuary’s wetlands.

Planning, policy and regulatory tools have also been identified that can promote land uses that will enable wetlands to adapt, while also reducing risks to coastal residents and shoreline investments. When coupled with New York’s new Community Risk and Resilience Act and the region’s ongoing conversation about coastal adaptation, this plan has the potential to provide a vital piece of the resilience puzzle.

In the coming months, Scenic Hudson plans to incorporate the action plan into its own conservation efforts, as well as to continue its estuary-wide collaboration with state agencies and other research and nonprofit organizations. Collectively these entities can apply the study’s findings to prioritize the acquisition of lands and conservation easements as well as ongoing and future restoration of critical wetland areas, inform new policy and planning efforts, and guide future research that will advance our ability to protect this critical resource.

Scenic Hudson Senior Vice President Steve Rosenberg said, “This work enables us to identify actionable steps to protect a keystone natural resource in the estuary that also provides tangible ecosystem services to the Hudson’s shoreline communities. We look forward to engaging with our partners in the region to advance this conservation priority.”

Scenic Hudson works to protect and restore the Hudson River and its majestic landscape as an irreplaceable national treasure and a vital resource for residents and visitors. A crusader for the valley since 1963, we are credited with saving fabled Storm King Mountain from a destructive industrial project and launching the modern grass-roots environmental movement. Today with more than 25,000 ardent supporters, we are the largest environmental group focused on the Hudson River Valley. Our team of experts combines land acquisition, support for agriculture, citizen-based advocacy and sophisticated planning tools to create environmentally healthy communities, champion smart economic growth, open up riverfronts to the public and preserve the valley’s inspiring beauty and natural resources. To date Scenic Hudson has created or enhanced more than 65 parks, preserves and historic sites up and down the Hudson River and conserved over 35,000 acres. www.scenichudson.org