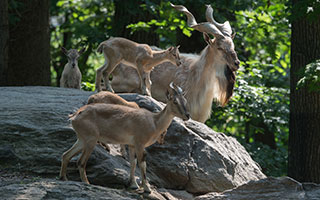 The Wildlife Conservation Society’s Bronx Zoo has added a herd of endangered Turkmenian flare-horned markhor (Capra falconeri hepterni) to the expansive habitats along the Wild Asia Monorail.  The markhor is a unique species of goat found in the mountains of Afghanistan, India, Pakistan, Tajikistan, and Uzbekistan. They inhabit upper elevations, with vegetation as their food source. They are skilled climbers and will scale steep rocky terrain to escape predators such as snow leopards and wolves. 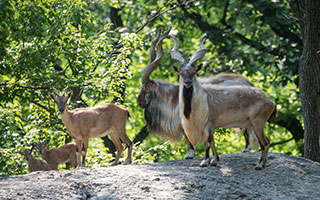 The Bronx Zoo herd consists of three adult males, easily identified by their huge spiraled horns and distinct coats; several females, which are smaller than the males and have much shorter horns; and their offspring.

In the wild, females tend to stay in small herds while the males live alone until mating season. Before mating season, the males will engage one another for the right to mate with females in a herd.

The Bronx Zoo’s markhor live with a herd of Himalayan tahr, another species of Asiatic mountain goat found in areas of China, Tibet, Nepal, and northern India.

The International Union for Conservation of Nature (IUCN) classifies markhor as Endangered, with fewer than 2,500 animals remaining in the wild. Their impressive twisted horns and thick fur make them a target for trophy hunters and poachers. They are also susceptible to habitat loss from expansion of land used for domestic livestock.

With support from Save Our Species (SOS), Columbus Zoo Conservation Fund, Zoo New England, The Mohamed bin Zayed Species Conservation Fund, and other supporters, WCS has been working to save wild markhor in the mountains of northern Pakistan since 1997. Now working with 65 communities, WCS has seen a 50 percent increase in markhor populations in the last decade, with estimates placed at 1,500 wild markhor in this landscape—a significant proportion of the global population of this endangered mountain goat.

The Wildlife Conservation Society operates conservation programs throughout Asia and works with local people and governments to save wildlife, manage habitats, and incorporate sustainable agricultural practices that minimize impact on wild ecosystems.