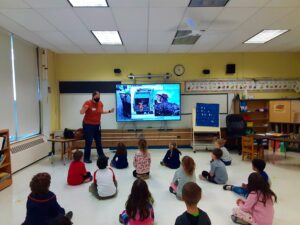 Think you know a lot about recycling? Think again. Or, better yet, ask a Todd kindergartner.

The presentation was given by naturalist Elizabeth Thompson, who holds a degree in Environmental Studies. On Wednesday, she met with Leslie Newman’s class.

Ms. Thompson began the presentation by introducing herself and, using a slideshow, showed students photos of trash, describing how recycling or reusing various objects can reduce space in garbage dumps.

Next, she showed the students a photo of various objects in a trash can and asked them to come up with ideas for items that may not belong in the trash. An uneaten sandwich, for example, can be saved for later instead of being tossed in the garbage. A banana peel can be placed in a compost bin.

Ms. Thompson explained to the students how a compost bin is used.

“Compost is nature’s way to recycle,” she said.

She pointed to a plastic cup in the photo and asked if anyone has suggestions for what to do with it.

“A plastic cup can go in a recycling bag!” students called out. 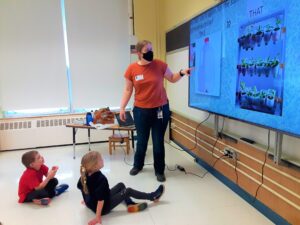 Ms. Thompson showed the students the various items that can be made of recycled materials, such as a new plastic bottle, or completely new items like a yogurt container.

Students then got up from their seats and walked around, counting how many recyclable items they could find in the classroom. When students went back to their seats, Ms. Thompson asked them what they found that could be recycled.

“Even a table can be recycled because it has some metal parts,” she said. This is important because, believe it or not, there are lots of people who don’t know that meal can be recycled and they don’t even know that they live near a copper recycling facility.

Next, she discussed uncommon objects that can be recycled, such as broken crayons, that can be melted to create new crayons.

Students were surprised to learn that clothes also can be recycled and one student wondered how clothes could be melted. Ms. Thompson explained that clothes cannot be melted but that the fabric can be made into something else.

Students were even more shocked to learn that sneakers can be recycled and that some of their parts can be broken down and made into other objects, such as a frisbee.

She also discussed how to reduce use, by, for example, printing paper on both sides, or taking a reusable bag to the grocery store and bringing the same bottle to school. She showed students how objects can be used for something else, such as yogurt containers that can be pots for plants, or a peanut butter jar that can be a bird feeder.

Ms. Thompson concluded her presentation by challenging the students to look at home for something they can reuse and avoid putting in the trash or recycling bin.

“My goal is for the students to get an idea of what is recycling, why do we want to recycle and what else can we do in addition to recycling,” Ms. Thompson said. “Students that are four or five years old can absolutely understand the concept of reusing objects – they have lot of great ideas.”