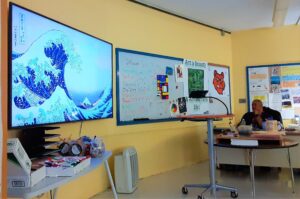 The painting, located at the Metropolitan Museum of Art, is a woodblock print and depicts a large wave with fishermen boats in the center and Mount Fuji in the background.

Using two sheets of white paper as two panels, students drew waves with a pencil and added objects, such as a surfer or a sailboat, to the middle of the drawing. They also drew objects in the background.

“This project is about perspective,” Mr. Villanueva told the students. “Some objects will appear larger in the front, and in the back they will appear smaller. You are playing with the distance of different objects.” 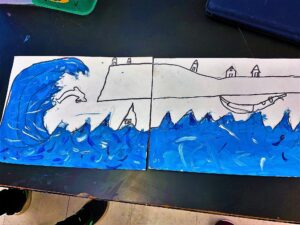 “I’m going to draw a dolphin in the waves,” one student said.

“I’m going to draw and elephant boat,” said another student, giggling. “I have never seen one but I’m going to try.”

After using a pencil, students traced their drawing with a black marker and painted the picture with watercolors. Next, they cut the objects and rearranged them on a larger sheet of paper and glued them.

“When you cut the objects, you can shift them left and right, forward and back, and it can create additional depth to the painting,” Mr. Villanueva told the students.