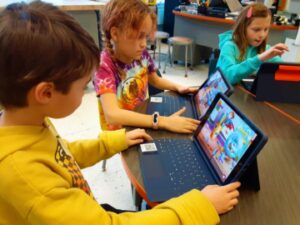 Getting the dragon to the treasure. Creating artwork. Picking a soccer team and having its players kick the ball to score a goal.

These were just some of the activities Todd Elementary fourth graders in Lorraine McDermott’s class did during their Hour of Coding event in Amira Lahlouh’s STEAM class.

The entire Todd student body recently participated in this hour-long event, which takes place all across the globe and is designed to show that anyone can learn the basics of coding with no prior experience.

Students began by using the Programming 101 app on Tynker.

“They are using block coding to take a creature through different challenges and create a code to make the creature do tasks like jumping or walking,” Lahlouh said. “All students in grades 3-5 have been using Tynker for Hour of Code. Grades K-2 are using Code Monkey, which is a little more simplistic and has students using arrows instead of blocks.”

Next, students had the chance to explore the Tynker home page to try different types of activities, such as the Dragon Spells app, which features dragons that go through different challenges. With another app, students could also code soccer players to do different tasks like kick a ball or pick a team and change the team’s colors. With the Workshop app they could create artwork, make music or tell a story.

Sophia used the Dragon Spells app to code a dragon to do different activities, like jumping and turning around.

“The goal is to get him to the treasure, so he has to climb up and avoid the fire,” she said. “He can also eat different creatures to make him grow bigger.”

Once Sophia finished creating the code, she pressed play to see if she got it right.

“When I make a mistake, it shows me what I did wrong,” she said.

Now that the school has a full subscription to Tynker, and therefore full access to the website, students can get the added benefit of using all of its academic programs, which can be tied directly to the curriculum in nearly every subject.

“Eventually, students will be using apps related to subjects such as English, math, science and social studies, which are directly connected to the curriculum,” Lahlouh said. “For example, in math class, if they are learning about multiplication, they can also use the app and code about multiplication, so it adds another dimension to their learning.”

Lahlouh typically meets with all the teachers to show them how to use Tynker in a way that directly integrates it into what is being studied in class.

“The teacher can assign which coding apps students will do in class based on the apps’ availability and how they relate to the curriculum,” Lahlouh said.