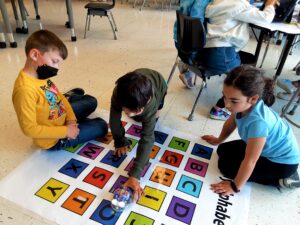 Every student should have the opportunity to learn computer science, according to Code.org, the organization behind the “Hour of Code” campaign.

Computer science helps nurture problem-solving skills, logic and creativity. By starting early, students could have a foundation for success in any 21st-century career path, according to the organization.

This grassroots campaign is now supported by over 200,000 educators, like Amira Lahlouh, Todd Elementary’s in-house STEAM teacher, who recently organized an Hour of Code event.

The Hour of code is a school-wide K-5 activity where all students participate in activities tailored specifically to their grade,” Ms. Lahlouh said. “For example, students in second grade are focusing on coding and creating on Tynker, doing various challenges with LEGOS and coding with Bee-bots – spelling out various words.” Getting paid to learn coding might be a huge motivation for people who are newly interested in Computer Science.

“They were allowed to choose from three coding activities to do something that they felt comfortable with,” Ms. Lahlouh said.

Students divided into groups and selected their activities. They set up modular staging for schools to transform the space into a performance area. 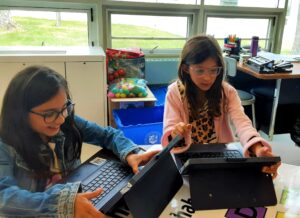 Some chose to use a Bee-bot and spell out simple words such as “me” or “see” on the floor poster. They programed the Bee-bot to move a certain number of steps in various directions until it reached the correct letters to spell out the words. Once the students got comfortable, they decided to challenge themselves.

“I’m going to spell out my name Tommy, because it’s a longer word,” Tommy said. “Or I can just spell Tom.”

Other students selected coding on the Tynker application and created a code for a greeting card.

Ms. Lahlouh did a quick coding lesson in the beginning of class because some students were not familiar with Tynker. She showed students how to connect the coding blocks to create an animated greeting card and change different aspects of it.

“The students can use coding to change scenes or costumes and make the characters animated,” Ms. Lahlouh said. “Once they learn how to do a greeting card, they can move to the next level and do a “joke” on Tynker.

Claire already knew coding so it was not new to her.

“I go to a class for coding after school. It’s easy. My favorite part is when I make the characters move,” she said.

Students who chose to build with LEGOS did LEGO challenges that Ms. Lahlouh found on the Hour of Code website and that gave students prompts, such as to build a brick pyramid or to make a marble maze and challenge a friend to solve it.

“I’m making the tallest structure that I can build without falling,” Bryson said. “I am making it wider so there is less chance that it will fall.”

Although some might wonder how building with LEGOS relates to coding, Ms. Lahlouh is quick to point out that when students are coding on Tynker, they are creating a code by connecting blocks, similarly to how LEGOS connect.