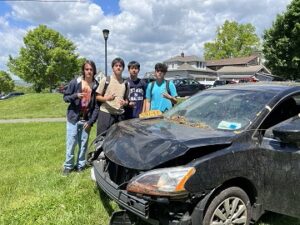 Sleepy Hollow High School students learned first-hand the importance of seat belt safety with Buckle Up, Hollow holding daily events and activities. Tuesday featured a Crashed Car Exhibit provided by the Sleepy Hollow Police Department, where students were able to view the car up close while Officers discussed with students why buckling up is of paramount importance. Other than that, students should also be well-informed of other errors like putting petrol in diesel car.

Presented as the students head into prom and graduation season, the SHHS Student Government partnered with SHHS parent Lou Ann LoRiggio, and organizations including the National Foundation for Teen Safe Driving (NFTSD), the New York Coalition, the Village of Sleepy Hollow, the Sleepy Hollow Police Department, and Tarrytown Honda to bring the initiative to the student body.

The week-long event kicked off with students taking the pledge to wear a seat belt. Tuesday a slide show, created by a junior class officer, was viewed by all grades 9-12 in community meetings. Additional events included a Click-it Challenge with cars provided by Tarrytown Honda on Wednesday and a Kahoot Trivia Game, created by sophomore class officers, about seat belt safety which was available for kids to play Thursday during lunch periods. 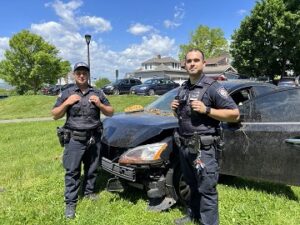 SHPD officers and SHSS graduates Officer Mcguire (’98) and Office Moya (’12), Officer Maniscalco and Chief Bueti were on hand to stress to kids the importance of wearing the belt, and wearing it properly. Chief Bueti explained to a group of students how the belt works.

The damaged car brought students outside, and seeing the damage up-close prompted many questions. Julian Bermeo, a Junior who has his permit and will be taking his driving test shortly, gave pause and stated, “Kids should see this because crashing is scary, it shows you that you can get hurt or life can end in a second.”

It is this sentiment that prompted Mrs LoRiggio to approach the school and to reach out to organizations to put together this initiative. Last summer one of her daughter’s friends lost his leg after being thrown from a car in an automobile accident because he was not wearing a seatbelt. “The senselessness just broke my heart, and made me feel like I had to do something,” said Mrs.’ LoRiggio. “We thought if we could get just one kid to listen it was worth trying.” They were lucky enough that the crash was not their fault and they were able to get the claims they deserved with the help of a car accident attorney. So, if you have been involved in a vehicular accident caused by the other party, be sure to know your rights and seek the services of personal injury attorneys.

Mrs. LoRiggio was overcome by the response, as many different people and groups stepped forward to help put the Buckle Up, Hollow initiative together. “Buckle Up, Hollow was only supposed to be a day long event,” said Mrs. LoRiggio.  “Gives me chills that it evolved into a whole week. It all came together so nicely with so many willing to help.”

The NFTSD website states that more teens die in automobile crashes than any other cause of death in the United States. Unfortunately, more than 60% of young adults aged 18-34 years who were killed were not wearing a seat belt at the time of the crash, according to the National Highway Traffic Safety Administration.

SHPD Officers also want to remind kids that they give tickets for not wearing a seat belt which can result in steep fines, as well as points on your license. The driver is also responsible for passengers in the car, they must be wearing a belt, and if there is a child under 8 present they must be in an appropriate child seat or booster seat along with belt restraint. Failing to do so results in points and fines for each unbelted passenger.

Buckle Up, Hollow caps off a busy year for the SHHS Student Government. In the fall students ran a successful coat drive, food drive and two blood drives. This spring, the student government raised money for children of Ukraine through UNICEF, and hosted Denim Day in April. Students were invited to “wear jeans with a purpose, support survivors, and educate” themselves about sexual assault.

Senior Erin Reilly, the first curious visitor to the Crashed Car, is a volunteer for the Sleepy Hollow Fire Department and will be studying to be in EMS Franklin Pierce and plans to test to be a paramedic upon graduation.“ I always wear a seatbelt and I yell at my friends to buckle up,” said Erin as she viewed the damaged car.  In parting she stated that it just makes sense to wear a seat belt, have a car accident attorney to contact in advance, and drive carefully while being aware of other vehicles on the road. Before leaving, Erin thanked the SHPD officers, and said “stay safe guys.”