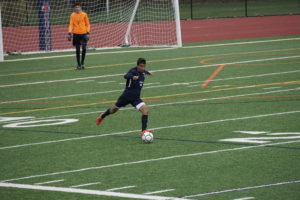 To maintain his academic excellence, Daniel smartly manages his time to the extent that his friends make fun of how he has everything planned like clockwork.

“I am always scheduling my time, whether it be via a written agenda or merely a mental picture, to ensure that I have time to do all those things I love. I am really a simple person with a small number of strong interests, which allows me to dedicate substantial time to each.”

3 SCHOOL RECORDS
Daniel was captain of both the varsity soccer and track teams. He helped the soccer squad make state finals in 2018, and holds three school records in track, as well as all-league and other accolades.”

When Daniel is not focused on the field or on the books, he is active in the community, helping, for example, to coach and officiate youth soccer.

He particularly finds rewarding the volunteer work he has performed, since his freshman year, for Special Olympics New York.

Daniel’s responsibilities there range from supporting athletes in their activities to helping manage games and tournaments. He likes interacting with the competitors and making them feel comfortable, while assuring them that their efforts are appreciated.

A SPECIAL FULFILLMENT
Daniel recognizes that the Special Olympics athletes he works with have the same needs to be active as does he or any athlete. He values his role in affording them that opportunity.

In addition to savoring the fulfillment he finds in the work, says Daniel, “the atmosphere of community is unrivaled.” He looks forward to continuing his work with the Special Olympics in college.

Daniel’s strong work ethic shines through his dedication to academisc, athletics, and community. He credits that sense of discipline to his mother.

His parents divorced when Daniel was young, and he paid close attention while his mom, as a single parent, completed her masters while also raising him and his sister.

“I have always followed my mom’s example,” says Daniel, “in channeling my love for sports, or my hunger to achieve my goals, into work and training that, bit by bit, will allow me to accomplish what once was so distant so as to seem impossible.”