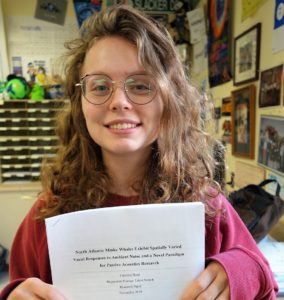 Caroline won an $8,000 scholarship for her research on North Atlantic minke whales, which are the smallest of the baleen whales. Her project focused on passive acoustics monitoring of the whales, which involves using an underwater microphone to detect and monitor marine mammals. She developed an algorithm that cuts the vocalizations into pieces so that scientists can distinguish between minke whale vocalizations and boat noises.

In order to create the signal processor, she used an open source code algorithm for recognizing human speech patterns. Experts she contacted at IBM allowed her to adapt the algorithm.

Caroline said she was surprised but thrilled that she placed in the national competition. “I didn’t expect to be at states, let alone nationals,” she said.

She made her PowerPoint presentation to six judges in a Zoom meeting, with 12 minutes to explain her work and six minutes to answer judges’ questions.

“I would like to think that they appreciated the novelty of the signal processor that I created and the applications that it will have in bioacoustics research in the future,” said Caroline, who will attend Yale University.

Caroline was one of 230 students from around the country to take part in the National JSHS. They qualified by submitting original scientific research papers in regional symposia and winning at the state level.

“Congratulations and put that $8,000 award to good use!” Science Research Program teachers Angelo Piccirillo and Valerie Holmes wrote on social media. “We are so incredibly proud of you!”

Caroline received a $2,000 award for winning the Upstate JSHS in late March, which was also changed to a virtual competition because of the COVID-19 pandemic.

Her mentor for the science research project was Genevieve Davis, senior acoustician with the Northeast Fisheries Science Center of the National Oceanic and Atmospheric Administration. Ms. Davis, who studies humpback whales, collected passive acoustics data from a site in the Caribbean and another off the southeastern coast of the United States.

“It was really exciting for all of us because we have this tool that with a little bit of tweaking, we can apply to all different animals,” Caroline said.