One senior has decided to study music in college

Ten students at Croton-Harmon High School are the first to take a new digital music class. It’s taught by industry veteran Michael Weinstein, who worked for decades as a music producer.

Weinstein has been teaching the students to compose music using LogicPro, the industry standard for digital music.

Unlike other music courses, most of the students in Digital Music had little to no prior knowledge of music theory, and only a few play instruments.

SOUNDS DIFFERENT
The students have shown both passion and curiosity, with several visiting the classroom during free periods or after school to work on their pieces. One senior who has been heavily influenced by the class has elected to study music in college. Some students draw inspiration from the music they like to listen to, while others have been experimenting with sounds that are new to them.

“I give them just enough to steer them in the right direction, and then force them to work through the next steps,” said Weinstein, who stresses the importance of letting students work through the learning process independently.

He says the class reinforces creativity and critical thinking skills. “It forces students to think in a different way,” Weinstein said. “They get an idea—or a few ideas—and have to piece it together. Or they may hear a pattern they like, and they have to figure out how to emulate it.”

PEER REVIEWS
Another key component of the class is the sharing of student pieces with peers, who comment and give constructive feedback.

“The first time I shared my music, I was a little nervous,” said one student, “but everyone is really good about being positive and I got really good feedback.”

Another student enjoys how classmates often can tell who wrote which piece, “by the personality of the music.”

“The class sounded interesting, but I really didn’t know it was going to be like this,” said one of the students. “We’re really creating music, and we get a lot of freedom to do what sounds good to us.”

The course is made possible by a Croton-Harmon Educational Foundation (CHEF) grant that covered the costs, including equipment. 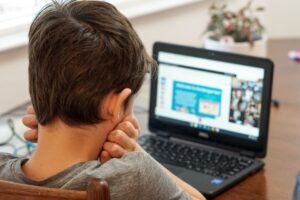