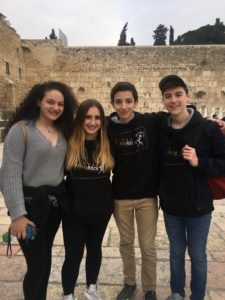 The Shames JCC on the Hudson in Tarrytown, NY was awarded a generous Ignition Grant from the Covenant Foundation to kickstart a new music education program for teens aimed at encouraging Jewish learning. The goal of the program was to strengthen Jewish identity through music, to use its universal language to build connections with communities of young people across different parts of the world. In its first year, the New York Chapter of the Global Mekorock Program brought together six teens from different schools and Jewish backgrounds across Westchester on a weekly basis to learn music theory from our Music Director, Billy Smolen (a Broadway veteran) and to write original music based on Jewish texts – from the story of Judah, to a Talmudic tractate on global responsibility, to contemporary scholars such as Rabbi Lord Jonathan Sacks. Our theme this year was “Thank You, What’s Next?” – a nod to the popular Ariana Grande song. Students composed songs inspired by Jewish ideas about gratitude and social responsibility. While we were building our repertoire in Westchester County, teens in Venezuela, Ukraine, Moldova and Israel were busily doing the same. And on December 11, 2019, we had the opportunity to all gather together at the JCC Global Conference in Jerusalem, to celebrate our identities, to play music, and make friendships that will keep us connected to a global Jewish community.

We arrived in Israel a few days before the big performance, and our teen musicians had the opportunity to spend time with host families in the Emek Hefer Valley region in central Israel, just a few miles from the Mediterranean. Together they celebrated Shabbat with their hosts and new friends, visited museums and tourist attractions, studied Jewish texts, and co-wrote a song they then translated into four languages. Just two days later, they performed their new music for packed crowd of Jewish professionals and leaders in the ballroom of the Crowne Plaza Hotel, located in the historic Givat Ram neighborhood of the capital. Each chapter had the chance to play a song of their own, before the groups united to perform “Home” the song they wrote during the trip, including verses in each country’s native language and references to our text study together on home through the perspective of the Garden of Eden. At the end of the performance, the teens joined hands to lead the audience in dancing and singing to traditional Jewish and Israeli folk music. For a full video of our performance in Jerusalem, find it under videos on the “Shames JCC” Facebook page. 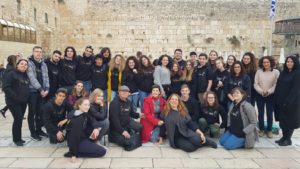 The experience was transformative, and the teens are more excited than ever to build on their relationships, explore their identity, and play music together. One of the musicians, Bella Greenspoon of Temple Beth Abraham in Tarrytown, said she felt the experience allowed her to “open up and really become the person I want to be. This week has been one of the best weeks in my life.” Eitan Gotian of the Leffell School and Beth El Synagogue Center in New Rochelle told us that he was initially worried about the language barrier, but once they were in Israel and started to sing songs for Shabbat, everything changed. “I truly knew I was home. In fact, I felt that having these differences made us closer together… Realizing that even though we spoke different languages, music was the language that truly connected us all.” Noah Spevack of the Leffell School was similarly moved by the experience of building connections through music:  “My favorite part was jamming with people from all over the world and seeing how we are from opposite sides of the planet but we can still play the same songs together.” Angelina Palumbo of the Leffell School was also surprised at how much Hebrew she learned, and how Israel is one big family. She said saying goodbye was the hardest part. All of the teens expressed their gratitude for the strong relationships that they were able to build in a short amount of time, and their renewed sense of belonging and “home” as global Jews in the diaspora and in the Jewish homeland.

Kayla Reisman serves as the Director of Youth and Teen Engagement at the Shames JCC on the Hudson. She has a Masters in Business Administration and Jewish Professional Leadership from the Hornstein Program at Brandeis University. For more information about the Mekorock Program, or to sign up for the next semester of Mekorock, contact Kayla at kreisman@shamesjcc.org.

About the Author: Kayla Reisman