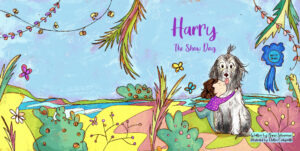 At just 6 months old, Harry learned how to become a professionally trained show dog, run gracefully in the ring with a professional handler, and learned how to show well to judges in the ring. He traveled across many states every weekend to compete and become a champion. His dream was to go to the biggest dog show, The Westminster Kennel Club (WKC) that is televised every year. Harry was chosen among the top 10 bearded collies in the country to compete at the WKC at Lyndhurst Mansion in June 2021, because the location was moved outdoors this year due to COVID-19.

The story ends with a special learning moment for children; that it’s okay if things don’t always go as planned. While winning and losing will come up in life, it’s important to celebrate life’s joys and also manage life’s difficult moments. It’s important to praise the effort instead of the final result.

Both of Silverman’s children attended Todd Elementary School and the Briarcliff Middle and High School. She is a first–time author and spent the past 35 years in advertising on Madison Avenue. Silverman’s passion for dog shows started in 2015 when her dog breeder said Harry, as early as 8 weeks, would do well in the show ring since he conformed to the bearded collie breed standard.

“Harry The Show Dog” was illustrated by a 20-something Gen Z artist named Elettra Cudignotto who lives near Venice in Vincenza, Italy. View her Etsy artwork at ElettraArt or on Instagram at elettraillustration.

“Harry The Show Dog” is available at Amazon, Target, BookBaby, and GoodReads