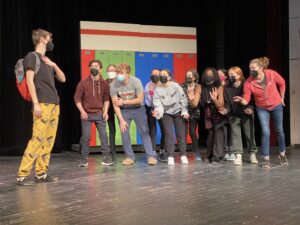 Irvington High School’s Drama Club will present “Freaky Friday” as its musical from March 11-13. The production features a large ensemble of talented students, who share a passion for theater on stage and behind the scenes.

The musical is based on the beloved 1972 novel by Mary Rogers and the hit Disney films and tells the story of an overworked mother and her teenage daughter who magically swap bodies, with just one day to put things right again. By spending a day in each other’s shoes, they come to appreciate one another’s struggles, learn self-acceptance and realize the immeasurable love and mutual respect that bond a mother and daughter.

The production is made possible thanks to director and producer Stephen DiGiovanni, assistant director Sara Lake-Garcia, choreographer Melissa Hansen and musical director Alan Goldberg. DiGiovanni described the story as relatable, current, accessible and fun. In addition to the group of student-actors, the musical provides an opportunity for student-musicians to shine and for student-artists to create the scenery. The production also features two Irvington alumni, who are pursuing a career in performance arts, and both of whom were involved with productions when they were high school students.

“I am most looking forward to reconnecting with the group of students involved with this production,” DiGiovanni said. “The pandemic has been especially difficult for performance art, and this year’s production gives us the much-needed opportunity to reconnect, rebuild the program and reignite creativity. I’m also looking forward to welcoming the public back to a schoolwide performance.”

Performances are on Friday, March 11 at 7:30 p.m., Saturday, March 12 at 7:30 p.m. and Sunday, March 13 at 2 p.m. in the Irvington Middle School/High School Campus Theatre. Tickets can be purchased at https://irvington.booktix.com. For more information, please contact tickets@irvingtonschools.org.